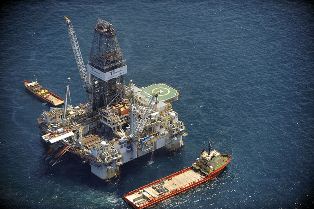 ALAMINOS CANYON BLOCK 857, GULF OF MEXICO (AP) -- Two hundred miles off the coast of Texas, ribbons of pipe are reaching for oil and natural gas deeper below the ocean's surface than ever before.

These pipes, which run nearly two miles deep, are connected to a floating platform that is so remote Shell named it Perdido, which means "lost" in Spanish. What attracted Shell to this location is a geologic formation found throughout the Gulf of Mexico that may contain enough oil to satisfy U.S. demand for two years.

While Perdido is isolated, it isn't alone. Across the Gulf, energy companies are probing dozens of new deepwater fields thanks to high oil prices and technological advances that finally make it possible to tap them.

The newfound oil will not do much to lower global oil prices. But together with increased production from onshore U.S. fields and slowing domestic demand for gasoline, it could help reduce U.S. oil imports by more than half over the next decade.

Eighteen months ago, such a flurry of activity in the Gulf seemed unlikely. The Obama administration halted drilling and stopped issuing new permits after the explosion of a BP well killed 11 workers and caused the largest oil spill in U.S. history.

But the drilling moratorium was eventually lifted and the Obama administration issued the first new drilling permit in March. Now the Gulf is humming again and oil executives describe it as the world's best place to drill.

"In the short term and the medium term, it's clearly the Gulf of Mexico," says Matthais Bichsel, a Royal Dutch Shell PLC board member who is in charge of all of the company's new projects and technology.

By early 2012 there will be more rigs in the Gulf designed to drill in its "deep water" - defined as 2,000 feet or deeper - than before the spill.

In November, Perdido began pumping oil from a field called Tobago; the well begins 9,627 feet below the surface of the Gulf. No other well on the globe produces oil in deeper water and that's about as deep as the Gulf gets. For drillers, that means the entire Gulf is now within reach.

"We are at the point where ... depth is not the primary issue anymore," says Marvin Odum, the head of Royal Dutch Shell's drilling unit in the Americas. "I do not worry that there is something in the Gulf that we cannot develop ... if we can find it."

From a distance, Perdido looks like an erector set perched on an aluminum can. This can, or "spar," is a 500-foot-tall steel cylinder that sits mostly underwater, serving as a base for the equipment and living quarters above. It is stuffed with iron ore to lower its center of gravity, keeping the whole operation from bobbing in the water like a cork. The spar is tethered to the sea floor 8,000 feet below with ropes and chains.

Oil and natural gas are pumped to Perdido from nearby wells drilled by an onboard rig and from faraway wells drilled by satellite rigs. Water and other impurities are then removed from the oil and gas, which gets sent hundreds of miles through an undersea pipeline to terminals and refineries along the Gulf coast.

As global oil demand climbs past 89 million barrels a day and traditional onshore and shallow water fields are depleted, the deep waters of the Gulf and off the coasts of South America, West Africa and Australia are playing an increasingly important role.

The Gulf is attractive for many reasons. Its oil fields are enormous; it straddles the world's biggest consumer of oil; it's in a politically stable part of the world; and drillers can easily tap into a vast network of pipelines and refineries. Also, despite industry complaints, the cost of royalties, taxes and regulation in the U.S. are among the lowest in the world.

"Everybody wants to be there," says Mohammad Rahman, the lead Gulf analyst for Wood Mackenzie.

By early 2012, there will be 40 deepwater rigs in the Gulf, up from 37 before the BP spill, according to Cinnamon Odell of ODS-Petrodata. BP received its first permit to drill in late October.

Thanks to more accurate imaging technologies, drillers are able to see under geologic formations that used to confound geologists. In June, ExxonMobil Corp. said it found 700 million barrels of oil - one of the biggest discoveries in the Gulf in last decade. In September, Chevron and BP also announced major finds, thought to be in the hundreds of millions of barrels of oil.

Many of the Gulf's recent discoveries are in a geologic formation known as the Lower Tertiary, formed between 23 million and 65 million years ago. Perdido, which is operated by Shell and owned jointly by Shell, Chevron and BP, is the first to produce oil from this formation. Analysts say it could hold 15 billion barrels of oil.

As the BP disaster made clear, drilling in deep water presents difficulties and dangers. Last month a Chevron well in the deep waters off of Brazil ruptured and spilled 2,400 barrels of oil into the Atlantic after Chevron underestimated the pressure of the oil field it was tapping.

Perdido only recently reached its monthly production target after a year of operation because of difficulties getting oil and gas from the seabed to the platform. New devices designed to separate oil and gas on the sea floor have not performed as well as Shell hoped. It has taken months of adjustments made by underwater robots and other equipment on the platform to fix the problems.

Challenges like this have helped push the average cost of producing oil in the deepwater Gulf to $60 a barrel, according to IHS CERA, near the highest level ever. But with oil close to $100 a barrel, the expense is well worth it.

After all 35 wells are drilled for Perdido, its owners will likely have spent $6.2 billion on the project, according to Wood Mackenzie. But along with the risks, the Gulf offers great rewards: Perdido could ultimately generate $39 billion in revenue and $16 billion in profits.

Jonathan Fahey can be reached at http://www.facebook.com/Fahey.Jonathan .