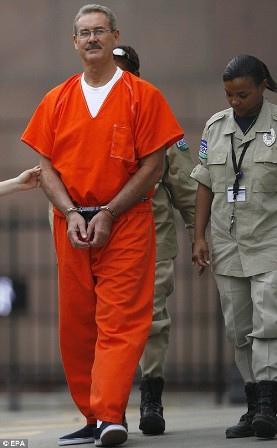 U.S. District Judge David Hittner's decision came after a nearly three-day competency hearing for the disgraced financier. The trial is set for Jan. 23. Hittner said he will rule next week on a request from Stanford's attorneys to delay the trial until April.

"We're disappointed. We hope he gets healthy," Ali Fazel, one of Stanford's attorneys said after the ruling.

Prosecutors declined to comment. A gag order is preventing attorneys from discussing the case.

Stanford had been declared incompetent in January due to an anti-anxiety drug addiction he developed while jailed in Houston. He spent more than eight months at a federal prison hospital in Butner, N.C., getting treatment for his addiction and being evaluated to determine if he had any long-term effects from being injured in a September 2009 jail fight.

A forensic psychologist who helped treat Stanford at the prison hospital testified the financier is now competent, can think clearly after being taken off the drug and has not suffered brain damage from the jail fight.

Doctors at the prison hospital and prosecutors accused Stanford of faking symptoms of amnesia. He says he can't remember all events in his life prior to the prison fight.

During closing arguments after testimony in the hearing had concluded earlier Thursday, prosecutor Gregg Costa said Stanford was exaggerating or faking memory loss and 14 other disorders the financier's medical experts had diagnosed him with in an attempt to "game the system" and avoid trial for a $7 billion fraud.

But four medical experts who testified on Stanford's behalf, including a neurologist and two forensic psychiatrists, said the financier suffered a traumatic brain injury in the jail fight that left him with severe memory loss and unable to think or communicate clearly.

"Every expert that has seen him says there is something wrong with him," Fazel said during closing arguments. "He wants to fight the case. He just wants to be able to help his lawyers. He is not running away from anything."

Stanford's medical experts said his brain injury, along with a major depressive disorder and post-traumatic stress disorder from the jail fight, has left him unable to assist his defense attorneys and to be ready for trial.

Those experts also testified that his treatment for other medical conditions, including heart and liver problems, complicated his brain injury and memory loss.

Stanford and three former executives of his now-defunct Stanford Financial Group are accused of orchestrating a colossal pyramid scheme that advised clients from 113 countries to invest more than $7 billion in certificates of deposit, or CDs, at the Stanford International Bank on the Caribbean island of Antigua, promising huge returns.

Stanford became a billionaire whose financial empire stretched across the U.S., the Caribbean and Latin America. His attorneys say he ran a legitimate business. He has been jailed since he was indicted in June 2009 by a federal grand jury in Houston, where his companies were headquartered.

He faces 14 counts, including wire and mail fraud.

Earlier Thursday, a prison official at the Houston federal detention center, where Stanford is being held, told Hittner doctors at the facility had become concerned Stanford might be suicidal after one of the financier's medical experts had testified about such concerns.

The official said doctors examined Stanford Wednesday evening and determined he is not suicidal but will continue to evaluate him.