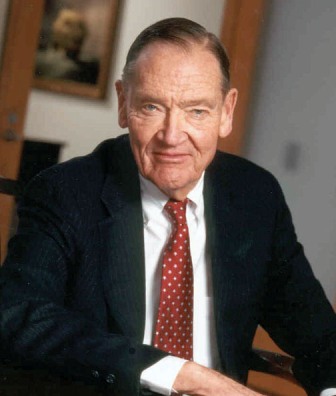 John C. Bogle counted himself among the 1 percent of wealthiest Americans a couple decades ago. You might not guess that today, when you hear the 82-year-old founder of mutual fund company Vanguard rail against economic inequality.

He can sound almost like an Occupy Wall Street protester: "Our markets have gone crazy, and there is 200 times as much speculation as there is investing," he says.

It has been 15 years since the low-cost investing pioneer stepped down as CEO of Vanguard. It was Bogle who launched the first index mutual fund in 1976. Vanguard Group has since grown into the largest fund company, managing nearly $1.7 trillion in U.S. fund assets.

Bogle remains wealthy, but his income is a fraction of what he earned when he ran Vanguard. He's paid a modest retainer to run Vanguard's Bogle Financial Markets Research Center, a think tank in Valley Forge, Pa.

He resists a label that applies to most people his age: "I'm so far from retired, it's almost an embarrassment. I'm here in the office every day." He's also writing his 10th book, "The Clash of Cultures: Investment vs. Speculation." And he continues to deliver speeches.

Bogle says he's paying close attention to tax policies he considers unfair, including one that's favorable to the fund industry and investors with taxable accounts. The top rate for dividends and long-term capital gains is historically low at 15 percent, as a result of the extension of Bush era tax cuts that Congress and President Barack Obama agreed to a year ago. In contrast, top earners pay 35 percent on regular income. He doesn't like that disparity.

Here are excerpts from a recent interview with Bogle:

Q: What do you think about the ongoing discussion over tax fairness?

A: I believe the rich should pay more, but that's not a good platform for tax policy. What has gone wrong is that we've failed to recognize the difference between earned income and unearned income. Is it really fair for gamblers on Wall Street to pay a 15 percent rate when they make a winning investment, and an honest working person - a bricklayer for example - may pay an equal or higher tax on their wages than a gambler? That's absolute absurdity.

Rates may have to be changed, but we also need to look at what is taxed, and how. Dividend income should be taxed at the same rate as ordinary income. As for capital gains, there ought to be some distinction between capital made by people who start businesses, and contribute value to society, and capital made by gamblers on Wall Street, some of whom win. Earned capital income should carry the regular dividend rate, but capital income gains by trading, and particularly short-term trading, should pay a higher tax, even than the present ordinary income rate.

Q: What's your take on the Occupy movement?

A: I'm happy to say that my current income puts me in the 99 percent group. So maybe I'm not so happy, I don't know.

This movement has brought to the surface some very serious problems in our country about disparities in opportunity and income. So many young people are having a terrible time getting a job.

The negative side is that they just pushed too hard for too long. It's very difficult for any movement without any seeming leadership - other than a good idea - to have any sense of taste or judgment. Who's to say, `This is going too far'? In some places, it's just gone on too long, and it's been too disruptive. So I think it's good that we've been cleaning up the plazas where the Occupy movement set up.

Q: What's the focus of the book you're writing?

A: That our financial system has gone off the rails. It's something we think of as providing capital for new businesses, that will enable people to finance new companies or add to the capital of existing companies. We do that to the tune of about $200 billion a year in financing through Wall Street, or through the financial system. And yet we do some $40 trillion worth of trading every year. I'm selling my investment to you, and you're buying it from me, and it creates no value for society. Indeed, it subtracts value, because the guy in the middle gets his piece.

Many mutual funds turn over 100 percent of their portfolios each year. When I got into this business, it was maybe 18 percent a year. It's amazing. This industry is a big part of the problem. What we need is a transfer tax on trading. We need to tame the trading and speculative element in our financial system.

A: If you're investing in stocks with idea of a one-year outcome, you should not invest. You can lose a lot. If you invest in stocks with a five-year outlook, I would think it is highly debatable if you should do that. You have to think about more than just the probabilities of a market crash. You have to consider the consequences for your savings, and whether you'd be decimated.

As for bonds, with interest rates and yields so low now, you just have to take those for what they are - a lot lower than what they have been historically.

With the economy, I'm cautious. I don't expect a boom in consumer spending over the next two or three years. People don't have the wherewithal to spend a lot more, and in today's world, they don't have the confidence. Confidence can change overnight, but wherewithal cannot.