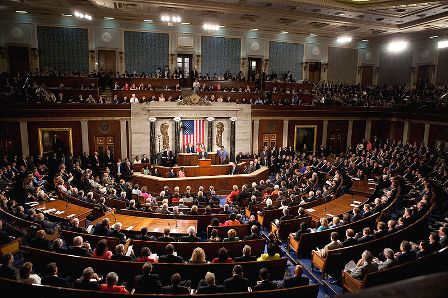 WASHINGTON (AP) -- Congress lurched toward Grinch-like gridlock on Tuesday as the Republican-controlled House rejected a two-month extension of Social Security tax cuts that President Barack Obama said was "the only viable way" to prevent a drop in take-home pay for 160 million workers on Jan. 1.

"The clock is ticking, time is running out," Obama said shortly after House voted 229-193 to request negotiations with the Senate on renewing the payroll tax cuts for a year.

House Speaker John Boehner, told that Obama had sought his help, replied, "I need the president to help out." His voice rose as he said it, and his words were cheered by dozens of Republicans lawmakers who have pushed him and the rest of the leadership to pursue a more confrontational strategy with Democrats and the White House in an already contentious year of divided government.

This time, it wasn't a partial government shutdown or even an unprecedented Treasury default that was at stake, but the prospect that payroll taxes would rise and long-term unemployment benefits end for millions of jobless victims of the worst recession since the 1930s.

Yet another deadline has been entangled in the dispute, this one affecting seniors, but the administration announced it had finessed a way around it. Officials said paperwork for doctors who treat Medicare patients in the early days of the new year will not be processed until Jan. 18, giving lawmakers more time to avert a 27 percent cut in fees threatened for Jan. 1.

Whatever the stakes, there was little indication that Republicans would get their wish for negotiations with the Senate any time soon. Senate Majority Leader Harry Reid, D-Nev., issued a statement saying he would be happy to resume talks on a yearlong measure - "but not before" the House ratifies the two-month bill and sends it to Obama for his signature.

Given Obama's remarks and Reid's refusal to negotiate, it was unclear what leverage Republicans had in the year-end standoff. It appeared likely the partisan disagreement could easily persist past Christmas and into the last week of the year.

The standoff was sowing confusion in business, running out of days to adapt to any new payroll tax regimen. Even the Senate's proposed two-month extension was creating headaches because it contained a two-tiered system geared to ensuring that higher-income earners paid a higher rate on some of their wages, according to a trade group.

"There's not time enough to do that in an orderly fashion," said Pete A. Isberg, president of the National Payroll Reporting Consortium trade group. "We're two weeks away from 2012." He wrote a letter to congressional leaders this week warning that the Senate bill "could create substantial problems, confusion and costs."

Democrats pounced on Republicans for rejecting the Senate bill, emboldened by polls finding Obama's approval rising and that of the congressional Republicans fading. They noted that several lawmakers whom Boehner appointed to negotiate a compromise had recently criticized an extension of payroll tax cuts.

Democrats also introduced legislation in the House to ratify the two-month bill that passed the Senate.

Rep. Steny Hoyer, D-Md., the second-ranking House Democrat, asked Majority Leader Eric Cantor, R-Va., if he was "prepared to bring that bill to the floor" if no compromise was in sight by year's end.

Canter dodged the question, responding that if Democrats wanted to do their part, they could appoint negotiators.

For his part, Boehner sent a letter to the president, noting he had requested a yearlong extension of the tax cut and the House had approved one. "There are still 11 days before the end of the year, and with so many Americans struggling, there is no reason they should be wasted," he wrote, asking Obama to call the Senate back from its year-end vacation.

In his appearance before White House reporters, Obama said Republicans would be to blame for the consequences of a standoff. "Right now, the recovery is fragile, but it is moving in the right direction," he said. "Our failure to do this could have effects not just on families but on the economy as a whole." Obama requested the extension of the payroll tax and unemployment benefits in the fall as part of his jobs program.

As recently as Friday, it appeared a compromise was in sight on the legislation.

After efforts to agree on a yearlong extension sputtered, Senate Republicans and Democrats agreed on the two-month renewal, with the bill's estimated $35 billion cost to be covered by an increased fee on mortgages backed by Fannie Mae and Freddie Mac. That assured deficits wouldn't rise, a key Republican objective.

Republicans also prevailed on their demand to require Obama to decide within 60 days the fate of a proposed Canada-to-Texas oil pipeline that promises thousands of construction jobs. The president's political supporters are divided on the Keystone XL project, with environmentalists generally opposing it and blue collar unions in favor, and Obama had hoped to avoid making a decision until after the 2012 elections.

The measure quickly cleared the Senate on a vote of 89-10, with 39 of 46 Republicans in favor. Sen. Mitch McConnell of Kentucky, the GOP leader, said he was optimistic the House would go along.

On a telephone conference call on Saturday, numerous GOP lawmakers told Boehner and the leadership they opposed the Senate-passed measure.

While House Republicans quickly developed their plan - reject the Senate bill and seek negotiations on a compromise - there were undercurrents of dissent.

One Republican, Rep. Tom Cole of Oklahoma, told fellow lawmakers at a closed-door meeting Monday night that he had been inaccurately quoted in an email from an unidentified GOP aide that described the contents of a private conference call, making it appear that the leadership itself was divided. Two lawmakers said details from the email found their way into print quickly after the conference call.

"It implied the speaker (Boehner) was in one place and the rest of leadership in another," Cole said in an interview Tuesday. "That wasn't the conversation."

Other Republicans said Boehner bristled in Monday night's meeting when asked whether he had given his blessing to the 60-day Senate compromise, replying that he had not and challenging one questioner to get his facts correct. They spoke on condition of anonymity, noting the events had occurred behind closed doors.

At the end of their first year in office, there was no doubt about the ability of dozens of first-term Republicans to flex their muscle.

As late as Monday night, several officials said, Cantor outlined a plan for the House to vote down the Senate bill, then vote separately to seek negotiations with the Senate.

Several Republicans objected, noting that would allow House Democrats an opportunity to go on record in favor of a payroll tax cut extension. The plan was changed, and in proceedings during the day, there was no opportunity for a straightforward yes-or-no vote on the Senate-passed bill that Democrats and the White House favor.