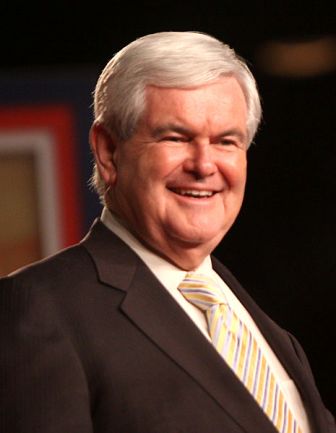 Jim Foley, chairman of the Derry GOP, on Friday filed a complaint against Gingrich with the state attorney general's office. Foley is not affiliated with any presidential campaign.

"I think it's a real lack of understanding, almost arrogance, in the Gingrich campaign staff about how things are done in New Hampshire. I can't stand idly by," Foley told The Associated Press.

He was joined by former state House Speaker Donna Sytek, a Mitt Romney supporter, who filed a separate complaint with state prosecutors.

Gingrich, the former House speaker, has surged to the lead in many Republican presidential polls across the country in recent weeks.

At issue is a New Hampshire law that prevents political campaigns from using pre-recorded political messages - known as "robo-calls" - to contact state residents on a national do-not-call list. Each alleged violation could result in a $5,000 fine.

Foley and Sytek said they had received Gingrich pre-recorded political phone calls in recent days. Both are on the do-not-call list.

Gingrich's campaign denied wrongdoing. But the issue highlights a larger challenge for Gingrich in New Hampshire and elsewhere.

He had little organization in early voting states until very recently and scrambled to hire staff in New Hampshire, South Carolina and Iowa after his poll numbers began to rise. Some staffers have been given great autonomy to run state-based campaigns, despite having little experience.

Gingrich's New Hampshire director, for example, is 29-year-old tea party activist Andrew Hemmingway, who had never worked on a campaign before being asked to run Gingrich's operation in the state with the nation's first presidential primary on Jan. 10.

"I understand that the Gingrich staff is somewhat young and inexperienced, but the rules are the rules," said Foley, who has served as the Derry GOP chairman for seven years.

Robo-calls are a sensitive issue in New Hampshire, which is inundated with political messages every four years.

Foley was among the New Hampshire Republicans who encouraged state prosecutors to go after the state Democratic Party for a separate robo-call incident last year. The party agreed to settle the matter this summer with a $5,000 fine.

"You'd like campaigns to observe the law, and the law is that you can't do robo-calls to the do-not-call list," Sytek said. "It's not the end of the world, but it just shows they seem to be making it up as they go along."

The state attorney general's office confirmed receipt of the complaints and said they were being reviewed.