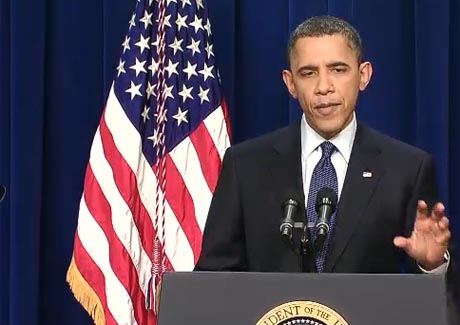 WASHINGTON (AP) -- President Barack Obama said Thursday it was just common sense to keep girls under the age of 17 from being able to buy a morning-after contraceptive pill off a drugstore shelf. Citing his own two daughters, Obama said: "I think most parents would probably feel the same way."

Plenty of pediatric leaders and women's advocacy groups did not, as reaction flowed in to the administration's decision to prevent the over-the-counter sale of the anti-pregnancy drug to sexually active girls of younger ages.

"When President Obama took office, he pledged the administration's commitment to scientific integrity," said Cynthia Pearson of the National Women's Health Network. "This decision is a betrayal of that promise."

At issue is a pill that can prevent pregnancy if taken soon enough after unprotected sex.

Obama rallied around Sebelius' arguments that younger girls may not be able to understand the medicine's labeling or use the pill properly. He insisted he was not involved in the decision in any way.

"I will say this, as the father of two young daughters: I think it is important for us to make sure that, you know, we apply some common sense to various rules when it comes to over-the-counter medicine," Obama said in a brief news conference at the White House.

Obama's daughter Malia is 13. His daughter Sasha is 10.

Obama said that as he understood it, Sebelius was wary of a 10-year-old or 11-year-old going into a drugstore and buying a medication - one on the shelves next to "the bubble gum and batteries" - that could be harmful if not used properly.

Stores, though, were never likely to put the drug near chewing gum or batteries. It was going to go on shelves by condoms, spermicides and pregnancy tests.

The rhetorical emphasis on the potential for 11- and 12-year-old girls to use the pill also rankled advocates.

There are no age restrictions on other over-the-counter drugs that could potentially have serious side-effects in young children.

"When it comes to FDA drug approvals, contraceptives are being held to a different and non-scientific standard - in a word, politics," said Nancy Northup, president of the Center for Reproductive Rights. She said the comments by Obama and Sebelius would suggest no FDA-approved drug - not a Tylenol or a Sudafed - should be on drugstore shelves.

The center has a pending lawsuit against FDA over the morning-after pill restrictions and will argue in court next week that FDA should be held in contempt.

According to the Guttmacher Institute, fewer than 1 percent of 11-year-old girls are sexually active, but almost half of girls have had sex by their 17th birthdays, most of those beginning at age 15 or 16.

Plan B costs about $50 for the single-pill package, and "no 11-year-old or 12-year-old is going to have that kind of money anyway," said Dr. Cora Breuner of the American Academy of Pediatrics, a professor of pediatric and adolescent medicine at the University of Washington.

The pediatricians' group, along with the American College of Obstetricians and Gynecologists and the American Medical Association, has pushed for over-the-counter access as a way to reduce unplanned pregnancies.

"How would condom sales be affected if men and women had to show identification to a sales clerk before making off with that precious package?" wrote Lehigh University biomedical ethicist Dena Davis.

Taking Plan B within 72 hours of rape, condom failure or just forgetting regular contraception can cut the chances of pregnancy by up to 89 percent. It works best if taken within 24 hours.

"The FDA did not have the data to support a decision of this magnitude," said Rep. Joe Pitts, R-Pa. "The secretary pointed out obvious deficiencies in the research and acted in the interest of young girls."

FDA Commissioner Dr. Margaret Hamburg made clear that the decision is highly unusual. She said her agency's drug-safety experts had carefully considered the question of young girls and she had agreed that Plan B's age limit should be lifted.

A person familiar with the decision said Sebelius did not share her reservations about Plan B ahead of time with the FDA.

The HHS secretary made her decision Tuesday night ahead of an expected announcement by the FDA on Wednesday. Sebelius notified Hamburg on Wednesday morning and then told the White House before publicly releasing her determination.

The person spoke on condition of anonymity because of the sensitivity of the issue.

Planned Parenthood, a reproductive rights group, has asked for a meeting with Sebelius.

The move has election-year implications and angered many Democrats. Sen. Patty Murray of Washington, a member of the Senate leadership, already was asking Sebelius to explain her decision. But it also could serve to illustrate to independents that Obama is not the liberal ideologue Republicans claim.

Presidential spokesman Jay Carney said "there was communication" between the White House and the health agency during the decision-making process. But he emphasized that it was Sebelius' decision.