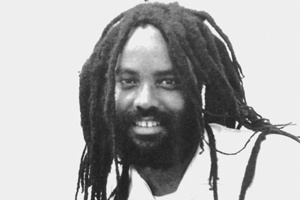 PHILADELPHIA (AP) -- Maureen Faulkner waited nearly 30 years for her husband's murderer to be executed. But following a seemingly endless cycle of legal appeals, she said she realized it would never happen.

On Wednesday, Faulkner gave her blessing to the decision by Philadelphia District Attorney Seth Williams to stop pursuing the death penalty for Mumia Abu-Jamal, whose claim that he was the victim of a racist legal system made him an international cause celebre.

The 57-year-old former Black Panther convicted of gunning down white police Officer Daniel Faulkner will now spend the rest of his life in prison, without the possibility of parole.

"My family and I have endured a three-decade ordeal at the hands of Mumia Abu-Jamal, his attorneys and his supporters, who in many cases never even took the time to educate themselves about the case before lending their names, giving their support and advocating for his freedom," Maureen Faulkner said. "All of this has taken an unimaginable physical, emotional and financial toll on each of us."

Williams, the city's first black district attorney, announced the decision two days short of the 30th anniversary of the patrolman's death. Williams said that "it is time to put this case to rest, for the good of the city of Philadelphia and, most importantly, the family of Daniel Faulkner."

"Another penalty proceeding would open the case to the repetition of the state appeals process and an unknowable number of years of federal review again, even if we were successful," the district attorney said.

Abu-Jamal was originally sentenced to death. His murder conviction was upheld through years of appeals. But in 2008, a federal appeals court ordered a new sentencing hearing on the grounds that the instructions given to the jury were potentially misleading.

After the U.S. Supreme Court declined to weigh in two months ago, prosecutors were forced to decide whether to pursue the death penalty again or accept a life sentence without parole.

"There is no question that justice is served when a death sentence from a misinformed jury is overturned," Ritter said. "Thirty years later, the district attorney's decision not to seek a new death sentence also furthers the interests of justice."

According to trial testimony, Abu-Jamal saw his brother scuffle with the patrolman during a 4 a.m. traffic stop in 1981 and ran toward the scene. Police found Abu-Jamal wounded by a round from Faulkner's gun. Faulkner, shot several times, was killed. A .38-caliber revolver registered to Abu-Jamal was found at the scene with five spent shell casings.

Over the years, Abu-Jamal challenged the predominantly white makeup of the jury, the instructions given to the jurors and the accounts of eyewitnesses. He also complained that his lawyer was ineffective, that the judge was racist and that another man confessed to the crime.

His writings and radio broadcasts from death row put him at the center of an international debate over capital punishment and made him the subject of books and movies. The one-time journalist's own 1995 book, "Live From Death Row," depicts prison life and calls the justice system racist.

He garnered worldwide support from the "Free Mumia" movement, with hundreds of vocal supporters and death-penalty opponents regularly turning out for court hearings in his case.

His message resonated on college campuses and in Hollywood. Actors Mike Farrell and Tim Robbins were among dozens of luminaries who used a New York Times ad to call for a new trial, and the Beastie Boys played a concert to raise money for Abu-Jamal's defense.

Amnesty International, which maintains that Abu-Jamal's trial was "manifestly unfair and failed to meet international fair trial standards," said the district attorney's decision does not go far enough. Abu-Jamal still has an appeal pending before the Pennsylvania Supreme Court over the validity of ballistics evidence.

"Amnesty International continues to believe that justice would best be served by granting Mumia Abu-Jamal a new trial," said Laura Moye, director of the human rights group's Campaign to Abolish the Death Penalty.

Williams stressed that Abu-Jamal's conviction has never been overturned. And he noted that many key witnesses have died or are unavailable after nearly three decades.

"There's never been any doubt in my mind that Mumia Abu-Jamal shot and killed Officer Faulkner. I believe that the appropriate sentence was handed down by a jury of his peers in 1982," said Williams. "While Abu-Jamal will no longer be facing the death penalty, he will remain behind bars for the rest of his life, and that is where he belongs."

"Where do Maureen and the Faulkner family go for a reduction in their sentence?" Costello said. "For 30 years now, they have been forced to suffer grief, anguish, abuse, insults, intimidation, threats and every other sort of indignity that can be visited on a family already in grief."

Faulkner lashed out at the judges who overturned the death sentence, calling them "dishonest cowards" who, she said, oppose capital punishment. The widow also vowed to fight any special treatment for Abu-Jamal behind bars, saying he should be moved to the general population after being taken off death row.

"I will not stand by and see him coddled, as he has been in the past," Faulkner said. "And I am heartened that he will be taken from the protective cloister he has been living in all these years and begin living among his own kind - the thugs and common criminals that infest our prisons."