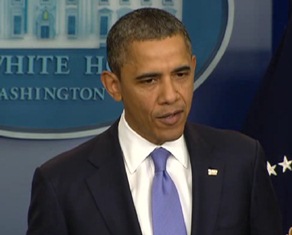 WASHINGTON (AP) -- President Barack Obama on Thursday forcefully rejected Republican accusations that his foreign policy is timid and amounts to a policy of "appeasement."

"Ask Osama bin Laden and the 22 out of 30 top al-Qaida leaders who have been taken off the field whether I engage in appeasement. Or whoever is left out there, ask them about that," the president said during a news conference.

He also defended his efforts to block Iran from building a nuclear weapon, saying Iran is now isolated and facing tough international sanctions thanks to the work of his national security team.

Former Sen. Rick Santorum of Pennsylvania on Wednesday said Obama's policy toward radical Islamists "has been nothing but appeasement."

Obama seemed primed for the question about the critique, and his communication director, Dan Pfeiffer, promptly posted the president's response on Twitter: "Ask Osama Bin Laden."

Former Massachusetts Gov. Mitt Romney on Wednesday said Obama "emboldened Palestinian hard-liners who now are poised to form a unity government with terrorist Hamas and feel they can bypass Israel at the bargaining table." Romney also accused Obama of being "timid and weak in the face of the existential threat of a nuclear Iran."

Obama, citing "some of the political noise out there," said his administration has "systematically imposed the toughest sanctions" on Iran.

"When we came into office, the world was divided; Iran was unified and moving aggressively on its own agenda," he said. "Today Iran is isolated, and the world is unified and applying the toughest sanctions that Iran's ever experienced, and it's having an impact inside of Iran."

Obama said he was considering all options for dealing with Iran, but declined to say what those options included.

He said Iran's suspected pursuit of nuclear weapons is contrary to the national security interests of the United States and its allies, including Israel. "And we are going to work with the world community to prevent that," the president said.

Last week at a New York fundraiser, Obama specifically addressed concerns from Israel supporters about his administration's approach to the Middle East.

"I try not to pat myself too much on the back, but this administration has done more in terms of the security of the state of Israel than any previous administration," Obama said then.