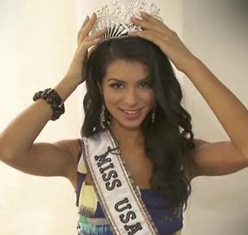 DETROIT (AP) -- Former Miss USA Rima Fakih was speeding and weaving through traffic with an uncorked, half-empty bottle of champagne and a blood-alcohol level more than twice the legal limit when she was arrested in the Detroit enclave of Highland Park, according to a police report released Tuesday.

The report on her drunken-driving arrest obtained by The Associated Press through a Freedom of Information Act request says the 26-year-old from Dearborn was pulled over early Saturday going 60 mph, weaving in heavy traffic and changing lanes without using a turn signal. Fakih was the first ever Arab American winner of the Miss USA event.

A police officer whose name was given only as R. Kalis said the traffic stop happened about 2:15 a.m.

The report says she was driving a black 2011 Jaguar.

Kalis reported asking for the driver's license said the "driver immediately identified herself as Miss USA and stated that she was driving a friend's car."

Kalis said Fakih "appeared disoriented and had very slurred speech while fumbling for her purse." Kalis asked Fakih if she had been drinking, and she said, "No, not at all."

In the report, officers said they found an open and half-empty bottle of Moet & Chandon champagne on the floorboard behind the driver's seat.

"I swear, I didn't know it was open," Fakih told Kalis, according to the report.

Two breath tests showed a 0.19 percent and a 0.20 percent blood-alcohol level. Michigan law defines drunkenness at a level of 0.08 percent.

The report said Fakih was handcuffed and taken to a police station. It said she was placed in a cell "until she was sober for her safety and the safety of others."

Police said they seized Fakih's driver's license and issued her a temporary license. She was ordered to report to court within 10 days. Besides drunken driving, Fakih also faces charges of possessing an open intoxicant in a motor vehicle and careless driving.

The former Miss Michigan born in Lebanon won the Miss USA Pageant in 2010 and her reign ended earlier this year.

While still holding the Miss USA title, Fakih became a contestant on the USA Network's "WWE Tough Enough" show. The show started with 12 men and women competing to be professional wrestlers.

Fakih was voted off the show in the episode broadcast April 25.

David N. Goodman can be reached at http://twitter.com/DavidNGoodman

Jeff Karoub can be reached at http://twitter.com/jeffkaroub