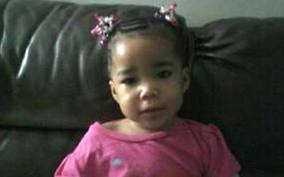 DETROIT (AP) -- About three dozen volunteers joined Detroit police officers in a hunt Monday for a 2-year-old girl reported missing by her father, who said she was taken during a carjacking last week.

They left in a cold morning rain from a church not far from where Dandre Lane, 32, told police that daughter Bianca Jones was last seen Friday. Searchers were split into groups of about 10 people and assigned blocks to canvass, looking through fields, alleys, vacant lots and trash cans. They were also asked to speak to people who could be witnesses.

Chief Ralph Godbee said Sunday investigators were questioning the truth of Lane's story, and Lane was in custody on an unrelated warrant. Police also searched his home Monday morning, but declined to provide details.

No suspects have been identified related to the alleged carjacking.

Banika Jones, the girl's mother, said before the search began that she last saw her daughter Nov. 26, when family and friends celebrated her birthday. Jones said Lane had taken Bianca to see a movie, brought her back to her mother's house for the party and then the girl left with her father.

"Please continue to keep searching for Bianca," Banika Jones said. "We love her and we want her home. Bianca, Mommy has lots and lots of gingerbread men for you when you get home."

Makibla Gideon, 39, of Highland Park, was with a group of five women searching. She said she doesn't know the family but felt compelled to participate.

She and her group searched vacant, ramshackle structures, peered in trash bags and bins, and lifted dirty old mattresses.

"You have to put all that aside when it comes to a precious little girl," Gideon said. "If it was my son or me missing, I would want somebody looking for me."