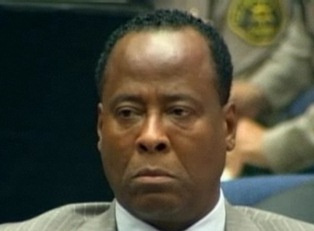 LOS ANGELES (AP) -- The doctor who was convicted in the overdose death of Michael Jackson was sentenced to the maximum four years in prison Tuesday in a finale to the tormented saga of the King of Pop.

Dr. Conrad Murray sat stoically with his hands crossed as Superior Court Judge Michael Pastor repeatedly chastised him for what he called a "horrific violation of trust" while caring for Jackson.

"Dr. Murray created a set of circumstances and became involved in a cycle of horrible medicine," the judge said. "The practice of propofol for medicine madness, which violated his sworn obligation, for money, fame prestige and whatever else may have occurred."

Pastor said one of the most disturbing aspects of Murray's case was a slurred recording of Jackson recovered from the doctor's cell phone.

"That tape recording was Dr. Murray's insurance policy," Pastor said. "It was designed to record his patient surreptitiously at that patient's most vulnerable point."

Michael Jackson's family told Pastor they were not seeking revenge but want the doctor who killed the superstar to receive a stiff sentence that serves as a warning to opportunistic doctors.

"The Bible reminds us that men cannot do justice, they can only seek justice," the family said in a statement read by attorney Brian Panish. "That is all we can ask as a family, and that is all we ask for here."

The statement went on to say, "We are not here to seek revenge. There is nothing you can do today that will bring Michael back."

Murray was convicted of involuntary manslaughter after a six-week trial that presented the most detailed account yet of Jackson's final hours but left many questions about Murray's treatment of the superstar with an operating-room anesthetic as he battled chronic insomnia.

"I do wonder though to what extent the court considers the entirety of a man's book of life, as opposed to one chapter," he told the judge.

The doctor decided not to directly address the court.

Chernoff again attacked Michael Jackson, as he and his team frequently did during the doctor's trial.

Jackson's death in June 2009 stunned the world, as did the ensuing investigation that led to Murray being charged in February 2010.

Murray told detectives he had been giving the singer nightly doses of propofol to help him sleep as he prepared for a series of comeback concerts. Propofol is supposed to be used in hospital settings and has never been approved for sleep treatments, yet Murray acknowledged giving it to Jackson then leaving the room on the day the singer died.

Murray declined to testify during his trial but did opt to participate in a documentary in which he said he didn't consider himself guilty of any crime and blamed Jackson for entrapping him into administering the propofol doses. His attorneys contended throughout the case that Jackson must have given himself the fatal dose when Murray left the singer's bedside.

In their sentencing memorandum, prosecutors cited Murray's statements to advocate that he receive the maximum term. They also want him to pay restitution to the singer's three children - Prince, Paris and Blanket.

It's unlikely that Murray can pay any sizable sum, including the $1.8 million cost of his funeral. He was deeply in debt when he agreed to serve as Jackson's personal physician for $150,000 a month, and the singer died before Murray received any money.

Prosecutors said the relationship of Jackson and Murray was corrupted by greed. Murray left his practices to serve as Jackson's doctor and look out for his well-being, but instead acted as an employee catering to the singer's desire to receive propofol to put him to sleep, prosecutors said.

"The defendant has displayed a complete lack of remorse for causing Michael Jackson's death," prosecutors wrote in a filing last week. "Even worse than failing to accept even the slightest level of responsibility, (Murray) has placed blame on everyone else, including the one person no longer here to defend himself, Michael Jackson."

Murray's attorneys are relying largely on 34 letters from relatives, friends and former patients to portray Murray in a softer light and win a lighter sentence. The letters and defense filings describe Murray's compassion as a doctor, including accepting lower payments from his mostly poor patients.