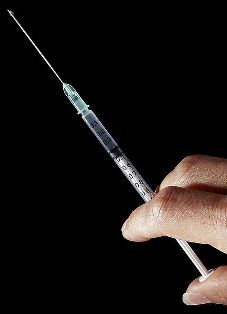 ATLANTA (AP) -- More parents are opting out of school shots for their kids. In eight states now, more than 1 in 20 public school kindergartners aren't getting all the vaccines required for attendance, an Associated Press analysis found.

That growing trend among parents seeking vaccine exemptions has health officials worried about outbreaks of diseases that once were all but stamped out.

The AP analysis found more than half of states have seen at least a slight rise in the rate of exemptions over the past five years. States with the highest exemption rates are in the West and Upper Midwest.

It's "really gotten much worse," said Mary Selecky, secretary of health for Washington state, where 6 percent of public school parents have opted out.

Rules for exemptions vary by state and can include medical, religious or - in some states - philosophical reasons.

Reasons for skipping some school shots vary. Some parents are skeptical that vaccines are essential. Others fear vaccines carry their own risks. Some find it easier to check a box opting out than the effort to get the shots and required paperwork schools demand. Still others are ambivalent, believing in older vaccines but questioning newer shots against, say, chickenpox.

The number of shots is also giving some parents pause. By the time most children are 6, they will have been stuck with a needle about two dozen times - with many of those shots given in infancy. The cumulative effect of all those shots has not been studied enough, some parents say.

"Many of the vaccines are unnecessary and public health officials don't honestly know what the effect of giving so many vaccines to such small children really are," said Jennifer Margulis, a mother of four and parenting book author in Ashland, Ore.

But few serious problems have turned up over years of vaccinations and several studies have shown no link with autism, a theory from the 1990s that has been widely discredited.

To be sure, childhood vaccination rates remain high overall, at 90 percent or better for several vaccines, including those for polio, measles, hepatitis B and even chickenpox. In many states, exemptions are filed for fewer than 1 percent of children entering school for the first time.

Health officials have not identified an exemption threshold that would likely lead to outbreaks. But as they push for 100 percent immunization, they worry when some states have exemption rates climbing over 5 percent. The average state exemption rate has been estimated at less than half that.

Even more troubling are pockets in some states where exemption rates much higher. In some rural counties in northeast Washington, for example, vaccination exemption rates in recent years have been above 20 percent and even as high as 50 percent.

"Vaccine refusers tend to cluster," said Saad Omer, an Emory University epidemiologist who has done extensive research on the issue.

While parents may think it does no harm to others if their kids skip some vaccines, they are in fact putting others at risk, health officials say. No vaccine is completely effective. If an outbreak begins in an unvaccinated group of children, a vaccinated child may still be at some risk of getting sick.

Studies have found communities with higher exemption rates sometimes are places where measles have suddenly re-emerged in outbreaks. Vaccinated kids are sometimes among the cases, or children too young to be vaccinated. Last year, California had more than 2,100 whooping cough cases, and 10 infants died. Only one had received a first dose of vaccine.

"Your child's risk of getting disease depends on what your neighbors do," said Omer.

And while it seems unlikely that diseases like polio and diphtheria could ever make a comeback to the U.S., immunization expert Dr. Lance Rodewald with the federal Centers for Disease Control and Prevention says it could happen.

"Polio can come back. China was polio free for two decades, and just this year, they were infected from Pakistan, and there is a big outbreak of polio China now. The same could happen here," Rodewald said in an email.

He cited outbreaks of Hib, a disease that can lead to meningitis, among the Amish who don't consistently vaccinate their children. Russia had a huge diphtheria outbreak in the early to mid-1990s, he said, because vaccine coverage declined. "Measles is just visible, but it isn't the only concern," Rodewald said.

For its review, the AP asked state health departments for kindergarten exemption rates for 2006-07 and 2010-11. The AP also looked at data states had previously reported to the federal government. (Most states don't have data for the current 2011-12 school year.)

Alaska had the highest exemption rate in 2010-11, at nearly 9 percent. Colorado's rate was 7 percent, Minnesota 6.5 percent, Vermont and Washington 6 percent, and Oregon, Michigan and Illinois were close behind.

Mississippi was lowest, at essentially 0 percent.

The AP found that vaccine exemptions rose in more than half of states, and 10 had increases over the five years of about 1.5 percentage points or more, a range health officials say is troubling.

Those states, too, were in the West and Midwest - Alaska, Kansas, Hawaii, Illinois, Michigan, Montana, Oregon, Vermont, Washington and Wisconsin. Arizona saw an increase that put that state in the same ballpark.

Exemption seekers are often middle-class, college-educated white people, but there are often a mix of views and philosophies. Exemption hot spots like Sedona, Ariz., and rural northeast Washington have concentrations of both alternative medicine-preferring as well as government-fearing libertarians.

Opposition to vaccines "is putting people together that normally would not be together," observed Elizabeth Jacobs, a University of Arizona epidemiologist looking at that state's rising exemption rates.

What many of exemption-seeking parents share, however, is a mental calculation that the dangers to their children of vaccine-preventable diseases are less important than the possible harms from vaccine. Or they just don't believe health officials, putting more stock in alternative sources - often discovered through Internet searches.

"We are being told this by every government official, teacher, doctor that we need vaccines to keep us safe from these diseases. I simply don't believe that to be true. I believe all the diseases in question were up to 90 percent in decline before mass vaccines ever were given. I don't think vaccines are what saved the world from disease. I think effective sewer systems, nutrition, and handwashing (are the reasons)," said Sabrina Paulick, of Ashland, Ore. She's part-time as a caregiver for elderly people in their homes and a mother of a 4-year-old daughter.

Parents say they'd like to reserve the right to decide what vaccinations their children should get, and when. Health officials reply that vaccinations are recommended at an early age to protect children before they encounter a dangerous infection. "If you delay, you're putting a child at risk," said Gerri Yett, a nurse who manages Alaska's immunization program.

Analyzing vaccination exemptions is difficult. States collect data differently; some base their exemption rates on just a small sample of schools - Alaska, for example - while others rely on more comprehensive numbers. So the AP worked with researchers at CDC, which statistically adjusted some states' 2010-11 data for a better comparison.

It's also not clear when an exemption was invoked against all vaccines and when it was used to excuse just one or two shots. CDC officials think the second scenario is more common.

Also, states differ on some of the vaccines required and what's needed to get an exemption: Sometimes only a box on a form needs to be checked, while some states want letters or even signed statements from doctors.

Meanwhile, some parent groups and others have pushed legislators to make exemptions easier or do away with vaccination requirements altogether. The number of states allowing philosophical exemptions grew from 15 to 20 in the last decade.

Some in public health are exasperated by the trend.

"Every time we give them evidence (that vaccines are safe), they come back with a new hypothesis" for why vaccines could be dangerous, said Kacey Ernst, another University of Arizona researcher.

The exemption increases have come during a time when the government has been raising its estimates of how many children have autism and related disorders. Some experts suggest that parents have listened intently to that message, with some believing the growing roster of recommended shots must somehow be related.

"I don't understand how other people don't see that these two things are related," said Stacy Allan, a Summit, N.J., mother who filed religious exemptions and stopped vaccinating her three children.

Several parents said that while they believe many health officials mean well, their distrust of the vaccine-making pharmaceutical industry only continues to grow.

"I wouldn't be one to say I am absolutely certain these things are hurting our children," said Michele Pereira, an Ashland mother of two young girls. She is a registered nurse and married to an anesthesiologist. While her daughters have had some vaccinations, they have not had the full recommended schedule.

"I feel like there are enough questions out there that I don't want to take the chance," she said.