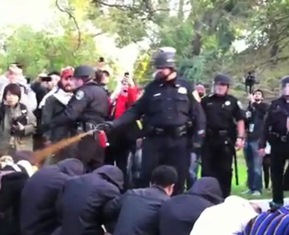 SAN FRANCISCO (AP) -- The president of the University of California system said he was "appalled" at images of protesters being doused with pepper spray and plans an assessment of law enforcement procedures on all 10 campuses, as the police chief and two officers were placed on administrative leave.

"Free speech is part of the DNA of this university, and non-violent protest has long been central to our history," UC President Mark G. Yudof said in a statement Sunday in response to the spraying of students sitting passively at UC Davis. "It is a value we must protect with vigilance."

Yudof said it was not his intention to "micromanage our campus police forces," but he said all 10 chancellors would convene soon for a discussion "about how to ensure proportional law enforcement response to non-violent protest."

Protesters from Occupy Sacramento planned to travel to nearby Davis on Monday for a noon rally in solidarity with the students, the group said in a statement.

UC Davis said early Monday in a news release that it was necessary to place police Chief Annette Spicuzza on administrative leave to restore trust and calm tensions. The school refused to identify the two officers who were place on administrative leave but one was a veteran of many years on the force and the other "fairly new" to the department, Spicuzza earlier told The Associated Press. She would not elaborate further because of the pending probe.

Videos posted online of the incident clearly show one riot-gear clad officer dousing the line of protesters with spray as they sit with their arms intertwined. Spicuzza told the AP that the second officer was identified during an intense review of several videos.

"We really wanted to be diligent in our research, and during our viewing of multiple videos we discovered the second officer," Spicuzza said. "This is the right thing to do."

Both officers were trained in the use of pepper spray as department policy dictates, and both had been sprayed with it themselves during training, the chief noted.

Meanwhile, UC Davis Chancellor Linda Katehi said she asked the Yolo County District Attorney's Office to investigate the department's use of force. She said she's been inundated with reaction from alumni, students and faculty and also would speed up an investigation that was to have taken three months.

"I spoke with students this weekend and I feel their outrage," Katehi said in a statement Sunday.

Katehi also set a 30-day deadline for her school's task force investigating the incident to issue its report. The task force, comprised of students, staff and faculty, will be chosen this week. She earlier had set a 90-day timetable. She also plans to meet with demonstrators Monday at their general assembly, said her spokeswoman, Claudia Morain.

The UC Davis faculty association called for Katehi's resignation, saying in a Saturday letter there had been a "gross failure of leadership." Katehi has resisted calls for her to quit.

"I am deeply saddened that this happened on our campus, and as chancellor, I take full responsibility for the incident," Katehi said Sunday. "However, I pledge to take the actions needed to ensure that this does not happen again. I feel very sorry for the harm our students were subjected to and I vow to work tirelessly to make the campus a more welcoming and safe place."

The incident reverberated well beyond the university, with condemnations and defenses of police from elected officials and from the wider public on Facebook and Twitter.

"On its face, this is an outrageous action for police to methodically pepper spray passive demonstrators who were exercising their right to peacefully protest at UC Davis," Senate President Pro Tem Darrell Steinberg, D-Sacramento, said in a statement Sunday. "Chancellor Katehi needs to immediately investigate, publically explain how this could happen and ensure that those responsible are held accountable."

The protest Friday was held in support of the overall Occupy Wall Street movement and in solidarity with protesters at the University of California, Berkeley who were jabbed by police with batons on Nov. 9.

Nine students hit by pepper spray were treated at the scene, two were taken to hospitals and later released, university officials said. Ten people were arrested.

Across the bay in Oakland, police cleared out the city's two remaining Occupy encampments on Sunday and Monday. Authorities say protesters at both locations left peacefully and no arrests were made.