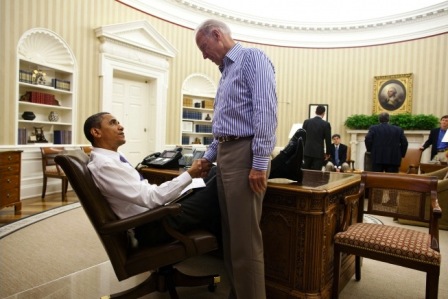 WASHINGTON (AP) -- Deadline nearing, the deficit-reduction talks in Congress sank toward gridlock Friday after supercommittee Democrats rejected a late Republican offer that included next-to-nothing in new tax revenue. Each side maneuvered to blame the other for a looming stalemate.

The panel faces a deadline of next Wednesday, the day before Thanksgiving, and lawmakers on both sides stressed they were ready to meet through the weekend in a last-ditch search for compromise.

But there was little indication after a day of closed-door meetings that a breakthrough was likely, both Democrats and Republicans emphasizing long-held political positions.

"Where the divide is right now is over taxes, and whether the wealthiest Americans should share in the sacrifices," said Washington Sen. Patty Murray, the Democratic co-chair of the panel.

But Michael Steel, a spokesman for House Speaker John Boehner, said Republicans had offered "a balanced, bipartisan plan - the fact that it was rejected makes it clear that Washington Democrats won't cut a dime in government spending without job-killing tax hikes."

While prospects for a deal faded, House Democrats checked a Republican attempt to pass a balanced budget amendment to the Constitution. The vote was 261-165, or 23 shy of the two-thirds majority required. GOP lawmakers voted overwhelmingly in favor, while Democrats generally opposed it, sealing its doom.

The vote on a noisy House floor contrasted to the secretive proceedings inside the supercommittee, a panel that projected optimism when it began its quest for a deficit deal late last summer but has yet to come to any significant compromise.

Republicans disclosed during the day they had outlined an offer on Thursday for about $543 billion in spending cuts - leaving Medicare, Medicaid and Social Security untouched - and $3 billion in higher tax revenue.

Most if not all of the recommended savings were items that Democrats have agreed to in earlier talks, but only, party officials said, on condition they part of a larger deal in which Republicans agreed to additional tax increases.

Democrats have long demanded that Republicans agree to significant amounts of higher taxes on the wealthy as part of any deal, and they quickly rejected the offer, according to officials in both parties.

It was unclear where the talks would turn next, but the GOP proposal suggested the discussions had effectively moved into a range of savings far below the $1.2 trillion the committee has been seeking.

It also appeared Republicans were jettisoning a plan for $300 billion in higher tax revenue, an offer that had exposed internal GOP divisions when it was presented two weeks ago. It also has failed to generate momentum for a compromise among Democrats.

If the panel fails to reach agreement, $1.2 trillion in automatic spending cuts are to take effect beginning in 2013, a prospect that lawmakers in both parties say they want to avoid.

That is particularly true among defense hawks, who argue that the Pentagon cannot sustain the estimated $500 billion in cuts that would be required on top of the $450 billion already in the works.

In a letter to Murray and Rep. Jeb Hensarling, R-Texas, the GOP chairman of the supercommittee, the head of the House Armed Services Committee warned of "immediate, dire and in some cases irrevocable" damage to the nation's military. "Our ability to respond to national security crises or humanitarian disasters would be disrupted," added Rep. Howard P. (Buck) McKeon, R-Calif.

Republicans familiar with the GOP plan said it included $543 billion in spending cuts, fees and other non-tax revenue, as well as the $3 billion corporate jet provision. There also would be $98 billion in reduced interest costs.

Officials familiar with the offer said it would save the government $121 billion by requiring federal civilian workers to contribute more to their pension plans, shave $23 billion from farm and nutrition programs and generate $15 billion from new auctions of broadcast spectrum to wireless companies.

It also would claim about $100 billion in savings from Pentagon civilian personnel costs and another $35 billion by increasing the fee that mortgage giants Fannie Mae and Freddie Mac charge lenders to guarantee repayment of new loans. The fee increase would add $15 a month to the monthly cost of an average new mortgage.

The per-ticket security fee to pay for Transportation Security Administration operations at the nation's airports would increase, and $18 billion would come from savings within Postal Service accounts.