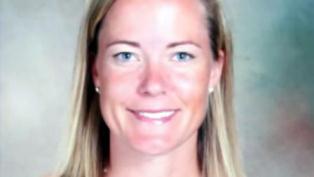 STOCKTON, Calif. (AP) -- A high school teacher is under investigation after school officials said she was maintaining a pornographic website from her school-issued laptop computer.

Lincoln High School teacher Heidi Kaeslin is on paid leave while the district investigates whether she violated its code of ethics, The Stockton Record reported ( http://bit.ly/uka7kA ).

The investigation also involves former Stockton police officer Richard Fields, who was assigned to the school as a resource officer. He told the newspaper he had acquired domain names including mysluttyteachers.com to develop them into websites.

Fields said Kaeslin's involvement was limited, and he eventually abandoned the venture.

The newspaper reports that one of the websites was active for only one day in February, which could indicate a test run.

Fields said the allegations are overblown. Kaeslin and her attorney declined to comment.

Kaeslin, a special education teacher and former girls soccer coach, has been with the district since 2002. Fields retired from the police department in May. The two are romantically linked, according to the paper.

Lincoln Unified School District has hired a computer expert to study the content on the laptop.

Chet Quaide, an attorney representing the district, said the school adopted an ethics code in 2003.

The code calls for teachers to "adhere to the highest ethical standards" and "to attain and maintain the highest possible degree of ethical conduct," he told the newspaper. "The code says that for breaches to constitute "unprofessional conduct," they must "involve jeopardy to student welfare; evidence malice, serious incompetency or bad judgment; or show a consistent pattern of misconduct."

Information from: The Record, http://www.recordnet.com/