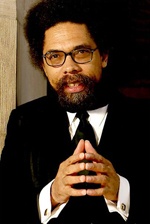 West tells The New York Times ( http://nyti.ms/vzjwFM ) that he'll become a professor of philosophy and Christian practices at Union next summer.

West was an assistant professor at Union in 1977.

He departed from Harvard in 2002 after a dispute with its president. He's leaving Princeton on good terms and will remain an emeritus professor there.

He has also taught at Yale.

Union's president, the Rev. Serene Jones, is one of West's former students.

Jones says the seminary is a good place for West to combine "his scholarly commitments and his activism."