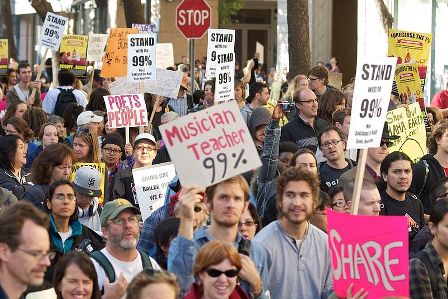 OAKLAND, Calif. (AP) -- Leaders across the country felt increasing pressure Friday to shut down Occupy encampments after two men died in shootings and another was found dead from a suspected combination of drugs and carbon monoxide poisoning caused by a propane heater inside a tent.

Citing a strain on crime-fighting resources, police pleaded with Occupy Oakland protesters to leave their encampment at the City Hall plaza where a man was shot and killed late Thursday.

The Oakland Police Officer's Association, which represents rank-and-file police, issued an open letter saying the camp is pulling officers away from crime-plagued neighborhoods.

"With last night's homicide, in broad daylight, in the middle of rush hour, Frank Ogawa Plaza is no longer safe," the letter said. "Please leave peacefully, with your heads held high, so we can get police officers back to work fighting crime in Oakland neighborhoods."

Mayor Jean Quan said the city would issue another official notice to protesters to leave the camp, but she did not give a deadline.

Since the shooting, anonymous fliers have been posted around the encampment urging protesters to leave.

"Occupiers, turn on your brains and see the harm you are causing to our town," it says. "You have devolved into mob rule. You have lost sight of the goal."

City Council President Larry Reid said outside City Hall that the shooting was further proof the tents must come down. He was confronted by a protester who said he wouldn't be in office much longer.

"You didn't elect me," Reid snapped back. "You probably ain't even registered to vote!"

Reid said the encampment has been a major setback for the area while attracting sex offenders, mentally ill and homeless people, and anarchists.

"This is no longer about Occupy Wall Street," he said. "This is about occupying Oakland and extracting whatever you can get out of Oakland by holding our city hostage."

The Oakland shooting occurred the same day a 35-year-old military veteran apparently shot himself to death in a tent at a Burlington, Vt., Occupy encampment.

On Friday, a man was found dead inside a tent at the Occupy Salt Lake City encampment, from what police said was a combination of drug use and carbon monoxide.

A preliminary investigation into the Oakland shooting suggested it resulted from a fight between two groups of men at or near the encampment, police Chief Howard Jordan said. Investigators do not know if the men in the fight were associated with Occupy Oakland, he said.

Protesters said there was no connection between the shooting and the camp.

The coroner's office said it was using fingerprints to identify the victim and that a positive identification was not likely to be released before Monday.

Protesters have been girding for another police raid as several City Council members have said the Oakland camp must go. After police cleared the camp last month, Quan changed course and allowed protesters to return.

The mayor's reversal strained relationships with city police and other San Francisco Bay area law enforcement agencies. More than a dozen agencies joined Oakland police in the Oct. 25 raid on the camp under a mutual aid policy in which each agency covers its own costs.

Alameda County Sheriff's Department spokesman Sgt. J.D. Nelson said Friday that Oakland will have to pick up the entire tab if it asks for deputies to assist another raid.

Mutual aid was designed for law enforcement agencies to assist each other in unplanned emergency situations, Nelson said.

"When government officials allowed those campers to go back in, well now you know what you're getting. It's not an unplanned event," he said.

In Vermont, police said a preliminary investigation showed the veteran fatally shot himself in the head in a tent in City Hall Park. The name of the Chittenden County man was being withheld because not all of his family has been notified.

The shooting raised questions about whether the protest would be allowed to continue, said Burlington police Deputy Chief Andi Higbee.

"Our responsibility is to keep the public safe. When there is a discharge of a firearm in a public place like this it's good cause to be concerned, greatly concerned," Higbee said.

The discovery of the man believed to be in his 40s at the Occupy Salt Lake City camp led police to order all protesters to leave the park where they have camped for weeks. The man has not been identified.

Group organizers said many of the roughly 150 protesters plan to go to jail rather than abandon the encampment.

"We don't even know if this is a tragedy or just natural," protest organizer Jesse Fruhwirth said. "They're scapegoating Occupy."

Salt Lake City police Chief Chris Burbank said officers have made 91 arrests at the camp, roughly the same number seen in the area during all of the last year.

Tensions were also high at the 300-tent encampment in Portland, Ore., which has become a hub for the city's homeless people and addicts.

Mayor Sam Adams ordered the camp shut down by midnight Saturday, saying the tipping point came this week with the arrest of a camper on suspicion of setting off a Molotov cocktail outside an office building, as well as two non-fatal drug overdoses at the camp.

Many at the camp said they would resist any effort to remove them.

"There will be a variety of tactics used," said organizer Adriane DeJerk, 26. "No social movement has ever been successful while being completely peaceful."

Police said some elements inside the camp may be building shields and makeshift weapons, including nails hammered into wood, while trying to gather gas masks.

"If there are anarchists, if there are weapons, if there is an intention to engage in violence and confrontation, that obviously raises our concerns," Portland police Lt. Robert King said.