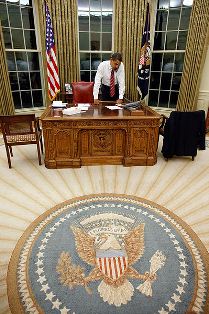 WASHINGTON (AP) -- In a shift in White House tactics on the cusp of an election year, President Barack Obama isn't shying away these days from saying that many of his policies were designed with African-Americans in mind.

Until now, the nation's first black president has carefully avoided putting any emphasis on race, ascribing to a rising-tide-lifts-all-boats approach to governing. That has drawn heavy criticism within the black community, so much so that, while dedicating the Martin Luther King Jr. memorial on the National Mall, Obama noted that even King faced rebuke "from his own people."

But on Wednesday, the White House convened a gathering of black business, political and community leaders to share a report on the multiple ways the president's agenda has benefited African-Americans. The president made a direct appeal for help on proposals "where we don't have to wait for Congress" to act. And he asked for initiatives he can pursue administratively "that would make a difference in the communities that all of you represent."

Obama acknowledged that black Americans have faced "enormous challenges," especially with unemployment, on his watch. He told the African-American Policy Agenda Conference that his three years of accomplishments have "lessened the severity" of the economic crisis for millions of people, made sure millions have health care and unemployment benefits and kept millions out of poverty.

The achievements were summed up in a report given to attendees who were encouraged several times to share its contents with their networks and communities.

The current 15.1 percent unemployment rate among blacks is "way too high," the president said, and various other problems that plagued black communities before he took office, such as housing and education, have worsened.

"We know tough times," the president said. "And what we also know, though, is that if we are persistent, if we are unified, and we remain hopeful, then we'll get through these tough times and better days lie ahead."

But Obama and members of his administration also worked hard to drive home the message that the president has not neglected the black community or ignored the fact that joblessness among African-Americans runs chronically higher than the overall unemployment rate, which is 9 percent.

"Since Day One, the president has fought for the policies that matter to the African-American community," as senior White House adviser Valerie Jarrett told reporters leading up to the summit.

The summit's first two panels, which featured Cabinet members, high-level White House advisers and deputy secretaries, gave laundry lists of the programs they said had benefited African-Americans. The lists mentioned a crackdown on states that have done a poor job of enrolling people who qualify for food stamps, bailing out the auto industry and helping community colleges to work with local businesses.

Increases in spending on college grant loans, making sure children with pre-existing conditions can get health care, tax credits and education improvements were among the many things mentioned.

Obama, who popped by the summit in a detour from the agenda, trumpeted elements of his jobs bill, which he noted is still pending in Congress, and said his plan is the only one out there that will put people back to work.

He also mentioned that his administration has sped up payments to government vendors so they are paid in 15-day rather than 30-day increments.

"This is something that can benefit folks right away, and we can start seeing a difference in our communities," Obama said.

Michael Eric Dyson, an author and sociology professor at Georgetown University, has criticized Obama for de-emphasizing race and called on him to craft policies more targeted to the black unemployment issue. He said the White House message on Wednesday showed that the White House had listened to some of the criticism that Obama was not talking enough about race.

"I'm glad they are sensitive to that need," said Dyson, who is black. "This is a chance to embrace what they have done."

The House is in recess this week so most members of the Congressional Black Caucus were not in Washington for the summit.

You can reach Suzanne Gamboa on Twitter at https://twitter.com/APsgamboa