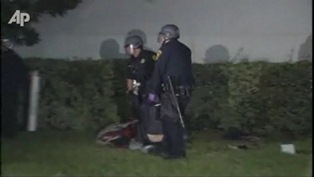 BERKELEY, Calif. (AP) -- Dozens of people were arrested during Occupy demonstrations at the University of California, Berkeley campus, as authorities twice clashed with protesters trying to set up encampments.

The bulk of the arrests came Wednesday night, as authorities in riot gear confronted demonstrators.

Television news footage from outside the university's main administration building showed officers pulling people from the steps and nudging others with batons as the crowd chanted, "We are the 99 percent!" and "Stop Beating Students!"

Thirty-two people were arrested on suspicion of resisting and delaying police officers and failing to disperse, UC Berkeley police Lt. Alex Yao told the Daily Californian (http://bit.ly/sMxDeb ). They were sent to Santa Rita Jail in Alameda County for processing.

The officers eventually formed a perimeter around the steps of the building.

As the evening wore on, the crowd swelled as protesters debated whether to stay overnight.

The university reported earlier that an administrator had told the protesters they could stay around the clock for a week, but only if they didn't pitch tents or use stoves or other items that would suggest people were sleeping there.

The protesters voted not to comply with the demand and to go ahead with setting up a tent site they dubbed "Occupy Cal" to protest financial policies they blame for causing deep cuts in higher education spending.

Earlier in the day, campus police assisted by Alameda County deputies dismantled a small encampment students had set up near Sproul Hall despite official warnings that such encampments would not be allowed.

University officials said seven people - six students and one faculty member - were arrested during that clash on charges of resisting and delaying peace officers in the performance of their duties and/or failure to disperse.

One of the seven was also charged with striking an officer.

The move to create a campus off-shoot of the Occupy Wall Street camps around the country came after hundreds of students, teachers and Berkeley residents rallied on campus before marching peacefully to a Bank of America branch.

At one point, Vice Chancellor for Student Affairs Harry Le Grande came out to negotiate, telling camp participants they could stay but only with certain conditions, such as not sleeping at the site or using sound amplifiers.

"The university supports the efforts of any group to speak out freely, but everyone is expected to follow campus policies, the law, and respect the rights of others to go to class, to teach, to do their work," campus spokeswoman Janet Gilmore said.

Shadrick Small, 25, a UC Berkeley graduate student in sociology, was among the protesters trying to block police from dismantling the camp.

"It just seems unnecessary. We weren't doing anything. We were just standing there with a bunch of tents," Small said. "And their first response is just to come in and start hitting people. The reaction is just over the top."