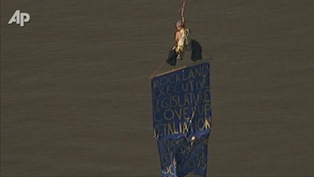 The man is mid-span on the bridge, a major crossing north of New York City that connects suburban Westchester and Rockland counties. He is hanging from a harness attached to a rope ladder about halfway between the Hudson River and the bridge roadway.

His sign accuses Rockland Country officials of a "cover-up" and "retaliation."

Rockland County spokesman Ron Levine says the man is a former employee with the county's department of mental health who was let go because he was unable to perform his duties. Levine says he is unsure of the man's complaints.

State police are trying to get the man back onto the bridge. Traffic is backed up for miles.

Information from: The Journal News, http://www.lohud.com