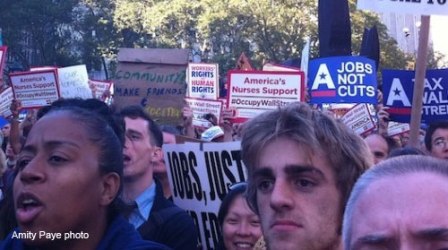 OAKLAND, Calif. -- Thousands of Oakland workers and students left their jobs and walked out of schools last week as part of a general strike intended to "shut down Oakland."

The groups converged on City Hall and joined with other protesters camped out at Frank Ogawa Plaza, recently renamed Oscar Grant Plaza by the Occupy Oakland demonstrators.

Early in the day, the protests at City Hall were peaceful and the police presence was minimal. Later in the afternoon, protesters marched to the Port of Oakland in hopes of shutting down operations by blocking entrances and creating havoc. Though they succeeded in shutting down port operations on Wednesday night, the port was up and running by Thursday.

Violence broke out in downtown Oakland later in the evening, after most of the protesters had left the port and returned to the plaza. By morning, 80 people had been arrested, and five civilians and three police officers had sustained injuries.

Young participants of the strike and walkout, interviewed by New America Media, had a number of issues on their minds, but education was at the forefront.

Michael Samson, 25, from Oakland, said he'd been waiting all of his life to see a protest of this magnitude.

"This is our future. If you're graduating from college right now, you know what the situation's like… For us, there's nothing. We're being hit with incredible amounts of student debt, in terms of loans."

Samson said he has a friend who graduated from Stanford who is now over $150,000 in debt.

A group of students who participated in the walkout of Berkeley High School said they all worry about getting into college and finding a job after they graduate. One of the students, an 18-year-old who preferred to remain anonymous, held a sign that read, "My education is worth more than corporate profit!"

Gerome, 23, from Oakland, goes to Holy Names College in the Oakland hills and works for the City of Berkeley. He attended the protest with his boss and said he wishes he saw more people out striking.

"You see all these empty spaces in the square. It would be nice to get everyone's voices heard and everyone involved, even (from) the places (in Oakland) people might not consider, like Piedmont and Montclair. Those are areas I would like to see get involved."

He also said he sees an absence of young black men in the Occupy Oakland movement and he thinks it's because a lot of them are too "stuck" in their immediate situations, so being engaged in the movement might seem "irrelevant" to them.

"Maybe if we could show… how much [corporate greed] is affecting them, they would want to come out and protest more."

Keith, 23, from Berkeley, called in sick to his job so he could be at the protest. He said the protests and occupations are the most exciting movement he has seen.

"I've always wanted there to be a mass movement bringing people together across the whole country from all different backgrounds, different classes and different races. I feel like this is just a really beautiful outpouring of indignation and solidarity and outrage for a better future and a better country, and I'm really excited about it."

Keith thinks the movement will only grow as people's options and opportunities decrease, and he hopes the occupations and protests can affect policy in the long run.

"There is a big group of people here that don't think of themselves as protesters, who have been chronically unemployed or unable to afford school, who at this point have nothing better to do. The greatest thing about this tactic is that all it takes is for you to have the time to be out here for a long time. So many people are out of work that there's a huge population that can do this and want to do this."