A Bike Means Freedom for South Side Chicago Kids 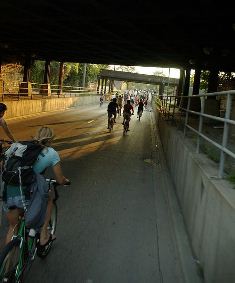 CHICAGO (AP) -- Each time 15-year-old Reginald Graham builds a bicycle, the process begins with a ritual.

He goes to the back room at the shop where he often works after school and scans the bikes and bike parts. Many are donated. Some are found, abandoned on bike racks. The key, Reggie says, is to find the right frame. It has to be solid. It has to fit the rider's build.

Always, there are diamonds in the rough that, with a little love and polish, can turn into something special.

Reggie was kind of like that, too - a diamond in the rough - when he first stepped into this warehouse on Chicago's South Side that is home to the Blackstone Bicycle Works.

That was two years ago. He was 13, a good kid - capable, by all accounts, but a bit lost. Then he put on a bike mechanic's apron for the first time, and something clicked.

Certainly, the fact that he could work 25 hours to earn a free bike was enticing.

That's why most kids come to the after-school program at this shop in the city's Woodlawn neighborhood. For these boys and girls, a bike represents freedom, a way to fly more quickly through the gang-ridden streets that surround the shop.

They feel the wind on their faces, and can be alone with their thoughts. Many ride to places they don't often go -- to the lakeshore or a museum or to the Lincoln Park Zoo, 10 miles to the north.

Grinning broadly, sixth-grader Kaniya Coleman says, "When I ride I feel like a super woman." She recalls a trip to the beach this summer when she and others wore capes while they rode in a pack, whooping and hollering all the way. "It was awesome."

For Reggie, there also is comfort, and freedom, in just being here in this place for a few hours - in working with his hands, in building something, in belonging.

"It feels like home. When you walk in, people greet you, say hello. People listen," says the 15-year-old high school freshman.

Once he chooses a bike for its frame, the process begins.

He strips it down, takes off the wheels and all rusted parts that have to be replaced. Then the rebuilding begins.

Reggie, who has worked his way up to the position of bike apprentice, wears a black apron that represents that status. The fledgling mechanics around him start with green aprons and work up to red and purple as they master the basics.

Aaron Swanton, an adult mechanic and the youth program manager at Blackstone, remembers when Reggie was one of those beginners. He didn't smile much, but had an intensity and steady work ethic.

"It's different for every kid. But sometimes it just fits right away - and for Reggie, that's how it's been," Swanton says.

He and the other adults at the shop learned, over time, about the "complications" of Reggie's home life, including helping to care for his grandmother, who is chronically ill. With just his younger sister living there with them, he was the man of the house, but at 13 wasn't prepared for that.

"I needed somebody to show me how to be a man," Reggie says.

Turns out, Swanton, a former teacher who's been at the shop for more than four years, was one of those people.

Blackstone is a working bike shop, probably best described as a youth-focused nonprofit organization that sustains itself with bike sales and repairs. There are at least 20 kids there on any given day, doing homework, playing games or putting time in at the shop. When they've worked on bikes for 20 hours, they get to choose one to rebuild that they can keep. When they get to 25 hours, they can take that bike home. They can repeat this process, and earn as many bikes as they like, Swanton says.

The bikes that don't go to kids are sold each Saturday. Many of the customers are students and faculty from the University of Chicago, a few blocks to the north.

After he strips a frame, he often works first on the handlebars, rummaging through used bike parts to find them. For his own bikes, he tends to choose the kind that stick straight up on the ends, like the horns of a bull.

They look powerful and give him good control, which can be an elusive commodity in this neighborhood.

Most of the kids who come to the after-school program don't have much to call their own. Many come from gang families.

But Tyjuan Edwards, a youth mentor there who is himself a product of the South Side, wanted kids from those families to have a respite, too. He approached gang members in the neighborhood.

"If you don't want your little brother or sister out here with you, send them to the shop," Edwards, who's known as "T," told them.

Here, for a couple of hours, they can work on bikes, finish their schoolwork with volunteer tutors and snack on fresh fruit. If they earn a bike, Edwards says, all the better.

Reggie pulls old tires and tubes off the bike wheels and replaces them with new ones. This is the easy part, he says. This is the first thing new bike mechanics learn how to do.

Once he has those back on, he assembles the chain, screws on pedals and finds a seat.

He prefers a bike without multiple gears, likes to power the bike himself.

He is a big, strong kid, plays football now on his high school team. Edwards beams "like a proud dad" when he talks about the three times Reggie sacked the quarterback in a game this fall.

Indeed, these guys have become Reggie's family. He likes to make them proud - and talks about going to college and becoming a mechanic, or a lawyer.

Other kids say the same. Fifth-grader Diamond Chester comes to the shop to build bikes sometimes - but for her, the help with homework is most important.

"I want to be accepted to a good high school," she says, fully believing that coming here will help her do that, as it has Reggie and others.

Reggie runs the cable through the plastic housing and pulls it through. Once he's got it set, he cranks the pedal to get the back wheel spinning, then squeezes the lever on the handle. The brake pads tighten and the wheel comes to a stop.

Outside the shop, a boy carelessly throws his books across a table where some of the kids are doing their homework. They jump at the loud noise, as the books scatter. Edwards turns around quickly. His tone is stern. "That's 10 push-ups," he tells the boy, who hesitates for a moment. "Come one. I'll do them with you."

At Blackstone, there are clear expectations. If you don't go to school, for instance, you can't come to the program. Respect is a must, as is cleaning up after yourself. You have to finish your homework before fixing or riding bikes or throwing a football.

"The importance of schoolwork is absolute." Swanton says. "No exceptions."

A mother who has brought her son to the shop to check out the after-school program hears that, and nods approvingly.

"That's what I'm talking about!" she says.

Not long after Reggie started coming to the shop, his school called Swanton to let him know that Reggie was skipping school. That was the last time that happened.

Now he's the one gently lecturing other kids about staying in line.

Things truly came full circle last school year, when he won a brand new bike for having the best report card. He stood by the bike and smiled for photos. Then he turned around and gave it to another kid.

"I already had a bike," he now says, shrugging. He figures he's earned at least 10, though some of them have been stolen.

"This kid didn't have one."

And there will always be another bike to build.

Martha Irvine is an AP national writer. She can be reached at mirvine(at)ap.org or http://twitter.com/irvineap