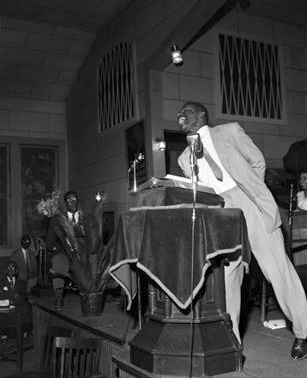 BIRMINGHAM, Ala. (AP) -- Those who toiled alongside the Rev. Fred Shuttlesworth through the beatings and bombings of the civil rights era were among the hundreds gathered Monday to celebrate his legacy in the city he fought to liberate from segregation.

Congressman John Lewis of Georgia, a native of Troy, Ala., worked with the Student Nonviolent Coordinating Committee during the civil rights movement. He recalled meeting Shuttlesworth in May 1961 during the Freedom Rides.

Lewis called the preacher "one of the founding fathers of the New America," who put his body on the line to end segregation and racial discrimination.

Shuttlesworth's fire and faith brought international attention to the brutality of legalized discrimination in the South. For decades after the 1963 campaign in Birmingham, Shuttlesworth continued to fight racial injustice in the city, even after moving to Cincinnati.

Shuttlesworth died Oct. 5. His funeral follows a Sunday memorial held in his honor. Members of the family of the Rev. Martin Luther King Jr. attended, along with the Revs. Joseph Lowery, Andrew Young and Jesse Jackson, and the widow of the Rev. Ralph David Abernathy.

Republican Gov. Robert Bentley spoke frankly about his own experiences with segregation, growing up on the other side of Jim Crow as a young white man in Shelby County and later as a student at the University of Alabama.

"Little did I know ... that I would stand here in a spirit of gratitude as your governor to honor a man who led the charge for a spirit of change," Bentley said.

The governor told the mostly black audience of mourners that before men like Shuttlesworth agitated for an end to segregation, he never gave much thought to the culture of racial discrimination that hung over society. He thanked his fellow Alabamian for undoing what he called "the teachings of a misdirected society."

Five decades ago, when King took the helm of the Montgomery, Ala., bus boycott in 1955, Shuttlesworth was already in Birmingham trying to start a movement. But hardly anyone was paying attention.

Shuttlesworth was from a small church. His credentials and pedigree made it easy for local whites to dismiss him as a radical. Until King came to Birmingham, Shuttlesworth couldn't get the national press to recognize his city as the embodiment of the horrors of the segregated South.

He was just another black preacher getting beat up, said former Atlanta mayor, congressman and United Nations ambassador Andrew Young, who worked alongside King and Shuttlesworth in the Southern Christian Leadership Conference. All three men helped establish the organization in 1957.

"They were sued together, they helped organize SCLC together," Young said Sunday of King and Shuttlesworth. "He wanted the spotlight very much, but there wasn't but one Martin Luther King."

It was King who won the Nobel Peace Prize in 1964 and went on to become the icon of the civil rights movement. Shuttlesworth, who was overshadowed in life by his comrade in the movement, was again eclipsed by King in death.

Though he died nearly three weeks ago, Shuttlesworth is only now being buried. The reason for the delay: The dedication of the King Memorial on the National Mall, sending most of Shuttlesworth's civil rights colleagues to Washington last weekend.

Had they not been there, they would have likely been in Birmingham remembering Shuttlesworth.

Shuttlesworth survived a Christmas 1956 bombing that destroyed his home, an assault during a 1957 protest, chest injuries when Birmingham authorities turned the hoses on demonstrators in 1963 and countless arrests. He moved to Ohio to pastor a church in the early 1960s, but returned frequently to Alabama for key protests. He came back to live in the Birmingham area after he retired a few years ago.