All Against Cain As Upstart Is Targeted in GOP Debate 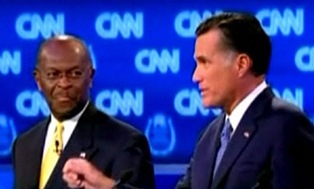 Old animosities flared, too, as former Massachusetts Gov. Mitt Romney and Texas Gov. Rick Perry swapped criticism in unusually personal terms. "You have a problem with allowing someone to finish speaking," Romney declared as the two men interrupted one another repeatedly in a disagreement over immigration, one of several vigorous clashes they had.

In a bow to Nevada voters, who will be among the first to choose among the candidates early next year, no one said he wanted to open a proposed nuclear waste repository at Yucca Mountain in a remote part of the state.

The fifth debate in six weeks ranged over familiar and contentious territory - from immigration and health care to the economy and energy, often in antagonistic terms. The candidates engaged each other more directly and sometimes more heatedly than in previous debates.

Romney's Mormon faith also came up, and Perry said he disagreed with a pastor and political supporter who described the religion as a cult. "I can't apologize any more than that," the Texan said.

But Cain's unlikely rise from asterisk in the polls to contender was clearly on the minds of his rivals on stage in a hotel along the Las Vegas Strip.

Rep. Michele Bachmann of Minnesota led the verbal assault moments after the debate began, saying his call for a 9 percent federal sales tax would only be the beginning, with the rate rising later.

Former Sen. Rick Santorum of Pennsylvania wasn't nearly as gentle, citing one analysis that found that taxes would go up for 84 percent of the nation's households if Cain's proposal went into effect. "We're talking about major increases in taxes," he said, adding that a single person and a couple with children with the same income would pay the same tax under Cain's proposal.

Undeterred, Cain insisted the charges were untrue. He said he was being criticized because lobbyists, accountants and others "want to continue to be able to manipulate the American people with a 10-million- word mess," the current tax code.

The former pizza company CEO is the latest and unlikeliest phenomenon in the race to pick a Republican rival for President Barack Obama. A black man in a party that draws few votes from Africans Americans, he had bumped along with little notice as Romney sought to fend off one fast-rising rival after another.

That all changed in the past few weeks, after Perry burst into the race and then fell back in the polls. However unlikely Cain's rise, Tuesday night's debate made clear that none of his rivals are willing to let him go unchallenged.

"Herman, I love you, brother, but let me tell you something, you don't need to have a big analysis to figure this thing out," Perry said to Cain. "Go to New Hampshire where they don't have a sales tax and you're fixing to give them one," he said, referring to the state that will hold the first primary early next year.

The debate was the fifth since Labor Day, and the last scheduled for nearly a month in a race that is fluid in more than one way.

While polls chart a series of rises and falls for various contenders - Romney remaining at or near the top - the schedule is far from set. Florida's decision to move up its primary set off a scramble as Iowa maneuvered to make sure its caucuses are the first real test of the race and New Hampshire works to protect its half-century distinction as host to the first primary.

It was Perry who instigated the confrontation over immigration, saying that Romney had no credentials on the issue because he had once hired an illegal worker, the "height of hypocrisy."

Romney denied the charge, saying he had hired a company to mow his lawn and did not know that it had an illegal immigrant on its payroll.

The two men talked over one another, and at one point, Romney placed his hand on Perry's shoulder.

"It's been a tough couple of debates for Rick. And I understand that so you're going to get testy," he said.

As Perry continued to speak, Romney stopped him: "You have a problem with allowing someone to finish speaking, and I suggest that if you want to become president of the United States, you've got to let both people speak," he said.

On a more substantive level, Perry said he opposed repealing the portion of the 14th Amendment to the Constitution that says anyone born in the United States is automatically a citizen.

Bachmann, Santorum and Rep. Ron Paul of Texas all sidestepped the question.

Cain found himself on the defensive on two others issues during the two-hour debate.

He apologized for earlier remarks about building an electric fence on the Mexico border that could kill people trying to cross illegally.

And he said he wouldn't be willing to negotiate with terrorists, even though he suggested he might be in an interview earlier in the day.

Foreign policy took a secondary role in the debate, and the new strain of Republican isolationism quickly surfaced.

Paul said U.S. troops should be withdrawn from Korea - where they have been stationed for more than 50 years - and foreign aid to Israel cut.

Perry said it was "time to have a very serious discussion about defunding the United Nations."

Former Utah Gov. Jon Huntsman skipped this debate, saying he was boycotting the Nevada caucuses in a dispute over the primary and caucus calendar. He is campaigning exclusively in New Hampshire in hopes of a victory that can move him into the thick of the race.

Not only Republicans, but Obama was also critical of Cain's economic plan during the day.

In an interview with ABC News, Obama said it would be a "huge burden" on middle-class and working families.