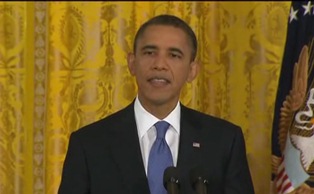 WASHINGTON (AP) -- Are President Barack Obama's ideas for job creation really bipartisan as he claims? Not when the means for paying for them are put in the equation.

The president dodged various facts and and left some evidence in the dust in his latest challenge to Republicans to get behind his jobs program or offer a real alternative.

A look at some of the claims in his fast-paced news conference and how they compare with the facts:

OBAMA: "If it turns out that there are Republicans who are opposed to this bill, they need to explain to me, but more importantly to their constituencies and the American people, why they're opposed, and what would they do."

THE FACTS: While Republicans might not be campaigning on their opposition to Obama's plan, they've hardly kept their objections a secret.

In a memorandum to House Republicans Sept. 16, House Speaker John Boehner and members of the GOP leadership said they could find common ground with Obama on the extension of certain business tax breaks, waiving a payment withholding provision for federal contractors, incentives for hiring veterans, and job training measures in connection with unemployment insurance.

They objected to new spending on public works programs, suggesting instead that Congress and the president work out those priorities in a highway spending bill. And they raised concerns about Obama's payroll tax cuts for workers and small businesses, arguing that the benefits of a one-year tax cut would be short-lived. The memo also pointed out that reducing payroll taxes, which pay for Social Security, temporarily forces Social Security to tap the government's general fund. And it opposed additional spending to prevent layoffs of teachers, police officers and other public workers.

OBAMA: "Every idea that we've put forward are ones that traditionally have been supported by Democrats and Republicans alike."

THE FACTS: Obama proposes to pay for his jobs bill by raising taxes, something traditionally opposed by Republicans and, in the form Obama proposed it, even some Democrats. Senate Democrats were so allergic to Obama's approach, which relied largely on limiting deductions that can be taken by individuals making over $200,000 a year and couples making more than $250,000, that they're eliminating it and replacing it with a new tax on millionaires.

In claiming bipartisan support for the components of his proposal, the president appears to be referring just to what the plan would do, not how it's paid for, but that's a crucial distinction he doesn't make.

Some of tax-cutting proposals offered by Obama have received significant Republican support in the past. But some of the new spending he proposes has received only nominal Republican backing. Evidence of bipartisanship provided by the White House includes legislation last year that provided $10 billion to prevent teacher layoffs. It won the support of only two Republican senators - Olympia Snowe and Susan Collins, both of Maine and among the most moderate Republicans in Congress. Another example cited by the White House was his proposal last year to offer tax breaks to businesses that hire new workers - it passed the House 217-201 with six Republican votes.

OBAMA: "The answer we're getting right now is: Well, we're going to roll back all these Obama regulations... Does anybody really think that that is going to create jobs right now and meet the challenges of a global economy?"

THE FACTS: Well, yes, some think it will. The U.S. Chamber of Commerce last month submitted a jobs proposal to Obama that included a call to ease regulations on businesses. It specifically called for streamlining environmental reviews on major construction projects and to delay the issuance of some potentially burdensome regulations until the economy and employment have improved. In the letter, Chamber President Thomas Donohue also called on Congress to pass legislation that would require congressional approval of major regulations. The chamber did not indicate how many jobs such regulatory changes could create, but it said: "Immediate regulatory relief is required in order to begin moving $1 trillion-$2 trillion in accumulated private capital off of the sidelines and into business expansion."

OBAMA: "We can either keep taxes exactly as they are for millionaires and billionaires, with loopholes that lead them to have lower tax rates, in some cases, than plumbers and teachers, or we can put teachers and construction workers and veterans back on the job."

THE FACTS: True, "in some cases" wealthy people can exploit loopholes to make their tax rate lower than for people of middle or low income. In recent rhetoric, Obama had suggested it was commonplace for rich people to pay lower rates than others, a claim not supported by IRS statistics. But on Thursday, Obama accurately stated that it only happens sometimes.

OBAMA: "China has been very aggressive in gaming the trading system to its advantage and to the disadvantage of other countries, particularly the United States. .... And currency manipulation is one example of it, or at least intervening in the currency markets in ways that have led their currency to be valued lower than the market would normally dictate. And that makes their exports cheaper and that makes our exports to them more expensive."

THE FACTS: While Obama complained about China's efforts to keeps its currency undervalued to gain trade advantages, his administration has repeatedly refused to brand China as a currency manipulator in a report that the Treasury Department is required to send to Congress twice a year.

Such a designation would trigger negotiations between the two countries and could ultimately lead to U.S. trade sanctions against China.