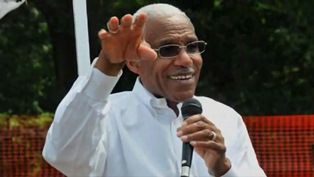 MEMPHIS, Tenn. (AP) -- Known for his mediation skills and stylish suits, Memphis Mayor A C Wharton has guided this gritty city through a $60 million budget deficit, a school funding battle and a historic Mississippi River flood.

Through it all, the silver-haired former lawyer has remained low-key and calm. Those traits have helped him maintain his support as he prepares for re-election Thursday in a city that has been beleaguered by poverty, crime and unemployment.

"I've got to have an upbeat spirit, no matter what challenges we face," Wharton said. "That aspect of being mayor is as important, or sometimes more important, than balancing the books."

Wharton won a special election in 2009 to replace Willie Herenton, the city's first elected black mayor who resigned after 18 years in office. Wharton previously served as Shelby County mayor for about seven years and was the first African-American law professor at the University of Mississippi, a position he held for 25 years. He also was Shelby County's chief public defender.

Wharton leads in polls by a substantial margin. His opponents include Edmund Ford Sr., the brother of former U.S. Rep. Harold Ford Sr., and James Harvey, a Shelby County commissioner who has chastised Wharton for backing more than $150 million in tax breaks for companies such as Electrolux and Mitsubishi Electric in the face of budget woes.

All three are black, which is important in a city where 63 percent of about 646,000 residents are African-American, according to the 2010 Census. Memphis was also recently declared the poorest big city in the country by the Census.

Wharton's ability to resolve conflicts has been put to the test. In July, tensions rose when the struggling, majority-black Memphis City Schools system merged with the more successful, majority-white Shelby County school system. Wharton stepped in near the end and helped smooth out what could have been a long, contentious process of planning the merger transition.

Then, when the Memphis school board decided to delay the start of classes until it received millions of dollars owed to it by the City Council, Wharton negotiated a deal and classes began on time.

"If we send a signal to the world that we might close our schools, that would have put a death spiral on us," Wharton said. "So, it was plain necessity. I had to get involved."

During the historic flood in the spring, Wharton coordinated with county emergency management officials and made several public pleas for citizens take the flood and evacuation orders seriously, while at the same time keeping calm.

Wharton has faced criticism over whether to privatize the city's sanitation department. The workers are represented by the same union that the Rev. Martin Luther King Jr. came to support when he was assassinated at Memphis' Lorraine Motel in April 1968.

The privatization fight was part of a larger budget issue. Wharton and a divided City Council pushed through a 4.6 percent pay cut for city workers, including firefighters and police. Union leaders said the city made no mention of the cuts during negotiations. They have decided to throw their support behind Ford.

"It came down to supporting someone who was being forthright and was making a dedication to honor agreements and to be transparent in the process," said Chad Johnson, incoming executive director of AFSCME Local 1733.

Wharton said the alternative to the pay cut was firing 450 city employees.

"You have to make some hard calls sometimes to lead," Wharton said.

He also has been criticized by city workers' unions for helping line up fat tax breaks for companies looking to build factories in the Memphis area. The mayor said the arrival of several international companies in Memphis promises to add thousands of jobs.

The city also is suing homeowners who have let their homes fall into foreclosure and have left the empty homes and weed-filled front lawns in serious disrepair. Wharton also announced a $12 million plan to fight poverty by giving financial rewards to residents who get jobs and make sure their children attend school on time.

Despite the city's troubles, Wharton seems to have preserved his popularity.

"His temperament suits this city well," said attorney Stacie Winkler, 33. "He'd be a great mediator, because that's what he does on a daily basis."

Wharton has been going to homes of likely voters on Saturdays. Recently, he was mostly welcomed with smiles and support from residents of well-kept houses in the Hickory Hill neighborhood. Some let him place campaign signs on their lawns.

Wharton stopped to speak with Willie Mack, a 63-year-old courier who showed the mayor the spot where a city contractor had done a poor job fixing a sidewalk and curb along the street in front of his home.

When Wharton said he would try to do something about it, Mack told the mayor, "The deadline is Oct. 6."

That drew laughs from the mayor, his campaign workers and a reporter, but Mack was serious.

Mack said he was reserving a decision on his vote until then. He said politicians like Wharton often support big business over the average worker.