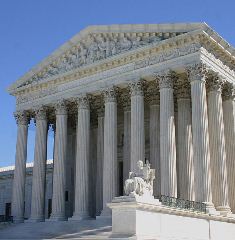 WASHINGTON (AP) -- The nine justices of the Supreme Court, who serve without seeking election, soon will have to decide whether to insert themselves into the center of the presidential campaign next year.

The high court began its new term Monday, and President Barack Obama's health care overhaul, which affects almost everyone in the country, is squarely in its sights.

The Obama administration's request last week that the justices resolve whether the health care law is constitutional makes it more likely than not that they will deliver their verdict by June 2012, just as Obama and his Republican opponent charge toward the fall campaign.

Already, GOP presidential contenders use virtually every debate and speech to assail Obama's major domestic accomplishment, which aims to extend health insurance to more than 30 million people now without coverage.

If as now expected the justices agree to review the law's constitutionality, those deliberations would certainly define the court's coming term. Their decision could rank as the court's most significant since the December 2000 ruling that effectively sealed George W. Bush's election as president.

Health care is only one of several issues that the court could hear that would make for a "fantastic Supreme Court term," said former acting Solicitor General Neal Katyal, now in private practice at the Hogan Lovells law firm.

Other high-profile cases on the horizon concern immigration and affirmative action, hot-button issues at any time and only more so in an election year.

Less likely, though still with a chance to make it to the court this year are cases involving gay marriage and the landmark Voting Rights Act that some Southern states argue has outlived its usefulness.

Decisions about whether to even to consider health care, affirmative action and immigration are a month off or more.

In the meantime, the justices will take up a First Amendment case looking at the regulation of television broadcasts as well as a couple of appeals involving the Fourth Amendment protections against unreasonable searches and seizures. One of those cases is a digital age dispute over the government's power to track a suspect's movement using a GPS device, without first getting a judge's approval.

Among the cases involving criminal defendants is one from an inmate awaiting execution in Alabama who missed a deadline to appeal his death sentence because the big-firm lawyers in New York who had been handling his case for free moved on to new jobs and letters from the court clerk sat in the firm's mailroom before being returned to sender.

The case of Cory Maples, convicted 15 years ago in the shooting deaths of two men, presents the question: "How much poor representation can one criminal defendant receive" before it violates the Constitution? said University of Maryland law professor Sherrilyn Ifill.

A lawsuit over a baby's passport also will be before the court in a case that has a taste of Middle East politics and a fight between the president and Congress.

Jerusalem-born Menachem Zivotofsky's parents want his U.S. passport to list his birthplace as Israel even though U.S. policy does not recognize the once-divided city as belonging to Israel. Congress, though, passed a law in 2002 giving Jerusalem-born U.S. citizens that option. Presidents of both parties have directed the State Department to ignore the law, saying it wrongly interferes with the president's powers.

Just over a third of the 48 cases the court has so far agreed to hear are of interest to the business sector, according to the U.S. Chamber of Commerce. But that list includes few big-ticket cases, unlike last term's victories for business interests in major cases seeking to limit consumer and employee access to the courts. Foremost among those was the decision to throw out a class-action lawsuit on behalf of up to 1.6 million female Wal-Mart employees.

The absence of high-profile business cases comes as something of a relief to Allison Zieve, the general counsel for Public Citizen, a not-for-profit group that calls itself a countervailing force to corporate power.

"The court seems more open to the plaintiffs' side in smaller civil rights cases. Smaller cases may be better for consumers," Zieve said.

The nation's major broadcasters are focused on one case that has the potential to reshape regulation of the airwaves. The federal appeals court in New York threw out the Federal Communications Commission's rules that apply when children are likely to be watching. That includes a ban on the use of curse words as well as fines against broadcasters who showed a woman's nude buttocks on a 2003 episode of ABC's "NYPD Blue."

The television networks argue that the policy is inconsistently applied and outdated, taking in only broadcast television and leaving unregulated the same content if transmitted on cable TV or over the Internet.

In an earlier version of the same case, the justices and lawyers discussed the policy for an hour without uttering any of the offending words.

The court is beginning its second year with the same complement of justices after consecutive terms of welcoming new members, Sonia Sotomayor and then Elena Kagan.

Those two justices, on the liberal-leaning side of the court, voted together on almost every case last year. The same was true for Chief Justice John Roberts and Justice Samuel Alito on the other side of the ideological spectrum.

Last year, Kagan sat out seven of the 12 cases the court heard in its first month because of her prior work as the Obama administration's top Supreme Court lawyer. This October, she will be absent from just one case, involving Congress' power to give copyright protection to works by foreign composers, directors and other artists, among them Sergei Prokofiev's "Peter and the Wolf," that long have been in the public domain.

There have been various calls for Kagan, as well as for Justices Antonin Scalia and Clarence Thomas, to sit out the health care case, but no indication that any of those justices intends to do so. Critics cite Kagan's former administration position, Scalia's address to the U.S. House tea party caucus, which opposes the law, and the public advocacy against the law by Thomas' wife, Ginny.

Also unlikely in the next year, with the presidential election imminent, is a retirement, At 78, Justice Ruth Bader Ginsburg is the oldest justice, but has said repeatedly she's not going anywhere anytime soon.