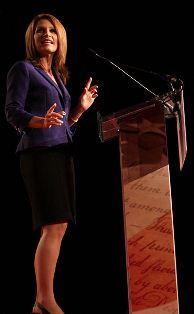 At a fundraiser Thursday in North Carolina, Bachmann traces the mass protests that sometimes turned deadly to Obama's call for Israel to return to negotiations and pull back to the territory it held prior to the 1967 war with Egypt.

In video posted by MSNBC, Bachmann says the president "has laid the table for the Arab Spring by demonstrating weakness from the United States of America."

The Arab spring protests stretched from Algeria in North Africa to Syria in the Middle East. Some led to political instability in nations with longstanding rulers.

Bachmann's campaign did not immediately return a message left by The Associated Press for elaboration.