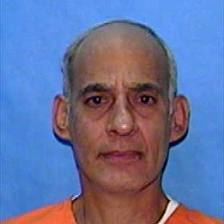 STARKE, Fla. (AP) -- A Florida man convicted of killing a police officer during a traffic stop 33 years ago has been executed at the Florida State Prison.

The governor's office said Manuel Valle, 61, was given an injection and pronounced dead at 7:14 p.m. Wednesday. He was the first Florida prisoner to be executed with a newly revised mix of lethal drugs.

Florida's was the latest in a spate of executions across the South in recent days, including the Sept. 21 execution of Troy Davis in Georgia for a policeman's shooting amid an international outcry and claims that he was innocent. That same day, Texas executed white supremacist Lawrence Russell Brewer for the dragging death of a black man. Last week, Alabama executed Derrick O. Mason for shooting dead a store clerk in a 1994 robbery.

Valle's execution began at 6:56 p.m. when a curtain opened onto the death chamber, allowing the slain officer's relatives and others in a witness room to see Valle strapped to a gurney, draped in a white sheet with face and arms exposed. He appeared calm and relaxed.

When the first drug was administered, Valle raised his feet, turned his head toward the execution team warden and said something that could not be heard in the witness room. He then yawned, placed his head back down, closed his eyes and made movements with his mouth before going still.

Jeneane Skeen, who was 13 when her father was killed, sat in the front row. She blinked rapidly and clenched her lips as she watched Valle's execution. Once Valle was pronounced dead, Skeen held back tears as she hugged a woman next to her and other relatives who also witnessed the execution consoled each other.

Pena's son, also named Louis Pena, stood outside the Florida prison hours before the execution and talked of closure. "It means finally, my dad's soul is put to rest after 33 years," said Pena while awaiting the execution. He was 19 when his father was killed and now is 53.

He noted that Valle's case worked through the courts for years, adding: "He killed a cop and lived 33 years. This man lived another lifetime after taking a life.