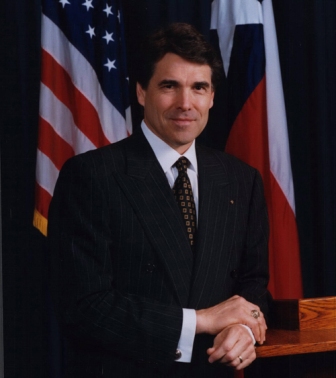 Republicans in early voting states, once excited about the Texas governor's presidential bid, are openly questioning the strength of his candidacy. High expectations have been met by the sudden national scrutiny that comes with the front-runner bull's-eye.

Perry is leading national polls, but he is also facing intensifying criticism from the right and left. Some Republicans in Iowa and New Hampshire are expressing doubts, especially after debates in which rivals raised questions about his record on immigration, public health and Social Security.

One national immigration group says Perry is finished. Conservatives are slamming his support of education benefits for illegal immigrants.

The campaign dismisses the criticism. After all, supporters say, he entered the presidential race just six weeks ago.

Things looked rosier then. Perry arrived to great fanfare and seemed poised to steal significant support from his top rival, former Massachusetts Gov. Mitt Romney. Many influential GOP activists saw Perry, with his executive experience and good jobs record, as an attractive alternative to Romney, who has struggled to win over conservatives who make up a sizeable portion of the party base.

Since then, the Texan has campaigned repeatedly in New Hampshire and Iowa, states that host the nation's first presidential voting contests in roughly four months.

And unaligned Republicans in those states - including some who backed Romney four years ago and are looking for an alternative - have watched Perry closely this month to see if the early buzz would become lasting campaign strength. But his debate performances, including bobbled attempts Thursday night in Florida at painting Romney as a flip-flopper, did not impress some influential activists.

"Perry has been doing damage to himself over the last couple weeks," said Jamie Burnett, a New Hampshire-based Republican who led Romney's political operation here four years ago but is unaligned this year. "Perry's on shaky ground, but I'm not willing to say there's no path to victory. But he's definitely not in the place he was during the first two weeks of his campaign."

"I think Americans just don't know sometimes which Mitt Romney they're dealing with," Perry said then. "Is it the Mitt Romney that was on the side of - against the Second Amendment before he was for the Second Amendment? Was it - was before - he was before the social programs from the standpoint of - he was for standing up for Roe versus Wade before he was against first - Roe versus Wade?"

He also suggested that those who oppose Texas' immigration law are heartless and he gave a wobbly response to a question on Pakistan, making him seem unprepared.

"The guy just isn't ready for prime time. It's not the issues themselves. It's how he handles them," said Doug Gross, a Des Moines lawyer who was Romney's Iowa co-chairman in 2008 but isn't backing any one candidate yet this year. "He doesn't look like a president."

Veteran Republican strategist Mary Matalin, who is not affiliated with any of the 2012 campaigns and is neutral, said that while debating is not Perry's strong suit, it's only one aspect of the early campaign.

"His support in the states that are the foundation of his strategy is not slipping," Matalin said. "Romney has been consistently really good, is solidifying his establishment support, but is far from closing the deal with conservatives."

Activists have discovered policy differences as they get to know Perry better.

He has drawn sharp criticism for requiring 6th-grade girls in Texas to be vaccinated against a sexually transmitted virus that can cause cancer, a position that frustrates libertarians and social conservatives alike. And on immigration, Perry's opposition to a border fence and support for education benefits for illegal immigrants who came to the country as children have been unpleasantly eye-opening to some in Iowa.

"Immigration and the vaccines are just tough sells," said former state GOP chairman Richard Schwarm, a Romney supporter in 2008 who has not yet committed to a candidate. "There are a lot of things people like about him, but those issues cause people a lot of problems."

Some national groups have been less diplomatic.

Rivals are looking to take advantage of Perry's woes in Iowa.

Romney is expected to step up his campaign presence in the state after visiting only twice this year. And Minnesota Rep. Michele Bachmann is focusing on Iowa to reclaim the attention she stirred in the state before Perry entered the race.

Top Perry strategist Dave Carney said the notion the governor is floundering is "more wishful thinking from other camps."

"Rick Perry has a solid record on the most important issues the voters care about. And we have only been in the race for five weeks. Since we started so far behind in every way we have a while to go until we catch up," Carney said.

The campaign hopes for a boost at the end of the month when it releases its quarterly fundraising totals, Perry's first such report.

He is known as a prolific fundraiser and has devoted considerable energy to filling his campaign coffers. A strong showing could help quiet questions.

Nationally, Republican voters so far have reported stronger positive feelings for Perry than for Romney, especially among self-described conservatives, according to a recent Associated Press-GfK poll. Perry's weakness has been his lower appeal among moderate Republicans, who view Romney markedly more favorably. The findings underscore Romney's effort to present himself as an economic conservative capable of drawing independent voters in a head-to-head campaign with Obama.

Regardless of the polling, some voters in Florida are grimacing.

"I don't think he did very well in the debate," said Doyle Thomas, a 70-year-old retired attorney from Cross City, Fla., in rural Dixie County. "He couldn't explain his positions."

Thomas said he likes Perry but isn't ready to sign on.

"If I could be king for a day, I'd be with Herman Cain. But I can't support him," he said. "I personally like Sarah Palin, but there ain't no way she can be elected." He sighed and shook his head. "I'll probably wind up with Romney because, more than anything, what I want to do is to defeat Obama."

Back in New Hampshire, Rep. Frank Guinta emphasized that there were still four months until the primary.

"Perry has a very high level of expectation to meet. If he doesn't hit it 100 percent, people start to ask questions," he said. "The bottom line is people are still talking about Rick Perry. It would be a mistake to count him out."