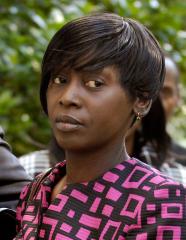 SAVANNAH, Ga. (AP) -- Troy Davis' sister said Friday she's not wasting time being angry as she presses to keep the 20-year legal fight her brother lost when he was executed. He used his final words in Georgia's death chamber to insist he wasn't a killer.

"We're going to keep moving forward," Martina Correia told The Associated Press. "That's what my brother would have wanted us to do, not be angry and wallow and those kinds of things."

The 42-year-old Davis died by injection for the 1989 slaying of off-duty Savannah police officer Mark MacPhail.

Davis' claims that he was wrongfully convicted in a case of mistaken identity won him support from thousands worldwide. Courts including the U.S. Supreme Court had stopped his execution three times since 2007 to take a closer look at the case, but they ultimately upheld Davis' sentence.

On Wednesday night, Davis looked at MacPhail's relatives and said, "I am innocent."

"Me and my family, people ask us, `Why aren't you crying? Why aren't you grieving?'" said his younger sister, Kim Davis. "My brother was at peace with God. He told us before, `Even though the state of Georgia may execute me, they will only take my physical body, never my soul.'"

MacPhail, 27, was shot twice after he rushed to help a homeless man who was being beaten outside a Savannah bus station where the officer was working off-duty as a security guard. Troy Davis insisted another man shot MacPhail, though prosecutors and the officer's family say they have no doubt Davis was the real killer.

Troy Davis' sisters say they're still making arrangements for his funeral. As of Friday, the state still had not released his body to the family, Kim Davis said.

His relatives say they'll make sure they have some time to mourn in private, but feel strongly that their brother's funeral should be open to the supporters who rallied around him.

"My brother's case has brought people together from all over the world, and what a family does is stick together," Kim Davis said. "Our family isn't only our physical blood relatives. It expands way beyond that."

It's not the first time the Davis family has mourned this year. Their mother, Virginia Davis, died at the family's Savannah home in April.

Her funeral was attended by Troy Davis supporters from Spain, England and Germany who had never met the family, the sisters said. Correia said she was grateful their mother hadn't survived to suffer through her son's execution.

"I'm just happy our mother wasn't here to deal with that," Correia said. "I think God blessed her."

Correia said her brother remained in high spirits during family visits in the days leading up to his execution at the state prison in Jackson.

They laughed and joked, swapped memories of their family. The sisters said they saw no sadness, no fear in him during their final hours together.

One thing he asked of them was to keep up his struggle so that he wouldn't die in vain.

"We told him we're not just fighting for your innocence," Kim Davis said. "We're fighting the judicial system here."