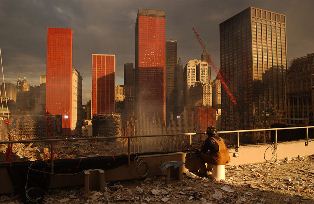 NEW YORK (AP) -- Nadine Mass' godfather died just steps from the exit of the World Trade Center. The Port Authority police officer and his captain had been trying to carry a woman in a wheelchair to safety.

Since Stephen Huczko Jr.'s death, his family has treasured photographs and memories of their time together. But it wasn't until this week that they were able to find a tangible symbol of his sacrifice.

"This is the first thing we've been able to have, to hold," Mass said, unrolling the crayon rubbing she took of his name at the newly opened 9/11 memorial. "This is our connection, maybe, to what really happened here. ... We can hold it. We can keep it."

The bronze bearing the thousands of names of those killed in the Sept. 11 attacks was specially processed to turn it a somber, matte black. Now, with the public opening of the plaza, those names have been transformed into a rainbow of colors as mourners and those paying their respects have used crayons of every shade to make rubbings of the names of the lost.

The etchings have been yellow, orange, blue, purple, green, red and black. Some of them are done in an untidy, childlike scribble, with the name emerging beneath. Others form a neat, exact record - a solid piece of history.

Such rubbings have long been a way to record and a way to mourn - a way to reclaim some piece of what has been lost. For decades, visitors have made similar mementos at the Vietnam Veterans Memorial in the nation's capital. And for at least a century, people have taken similar rubbings of gravestones.

Jim Brown has no cemetery where he can visit his brother-in-law, firefighter Kevin Bracken. Along with more than 1,100 others, Bracken's remains were never identified among the ruins of the twin towers. For his family, this place is the closest they have to a gravesite. Taking a rubbing of Bracken's name may be the closest they can come to bringing him home.

First seeing the memorial, "I felt a little bit of sadness," said Brown, who lost three relatives in the attacks. But "I felt better now that I've seen their names and taken a rubbing."

Mourners often are drawn to objects that represent a connection to the person they lost, said Charlton McIlwain, an American culture professor at New York University who has studied death rituals.

"People were looking for something tangible to hold onto, something that has some kind of emotional connection, for them, with their deceased loved one," he said.

The memorial, placed in the footprints of the twin towers, was designed with the rubbings in mind. One earlier version of the design would have included raised names with water flowing over them, but that idea was scrapped after a family member worried it would prevent people from making mementos from their loved ones' names, said memorial president Joe Daniels.

Ultimately, planners chose to create bronze parapets displaying the visual litany of names, the letters cleanly cut out of the bronze, with only light and emptiness beneath.

Now the memorial foundation is handing out rolls of white paper, ordered months ago, sized exactly so that visitors can make name rubbings. After testing a number of options, planners selected a black soy wax similar to a crayon that they believed made the clearest impressions, which they're giving out along with the paper.

Eventually, the memorial may charge visitors for a rubbing kit, Daniels said. But for the foreseeable future the materials will be free.

Some visitors surprised planners when they began taking rubbings not just of the names but also the raised group designations that name the fire companies and employers with whom victims were affiliated.

Keith Reed was among a group of volunteer firefighters from Lancaster, N.Y., paying their respects and making rubbings of the words First Responders and of the names of fire companies.

"We're bringing back souvenirs," he said, explaining that they planned to display the rubbings in their firehouse "for all the future generations."

While some visitors are bringing the rubbings away with them, others are leaving items behind. The cut-out names have become repositories for flowers, small flags and even notes, rolled up or folded into tiny packages, inserted into the gaps like an echo of the Wailing Wall. Above the name of Jane Eileen Josiah, one person left a single stone.

The items are cleared by workers each night. Flowers are discarded, while non-perishables are kept to be reviewed by curators for possible inclusion in the permanent collection, Daniels said.

Anything that falls inside the hollow bronze parapets is removed by workers who can access the space through removable panels.

Over time, the patina of the bronze will change. The pressure of crayon against paper against bronze is less likely to cause the shift than the skin oils of the millions of visitors who are expected to run their hands over the names, Daniels said, adding that it was gratifying to see the relatives of those lost make rubbings of their names.

"Families were in their regular routines that morning. You said goodbye or you didn't say goodbye and you went off to work. The abruptness of the loss is horrifying," he said. "So this is one little piece, that you can come to this very sacred place and take the name of your loved one back."

Rene Bollemans, visiting from Rotterdam, Holland, said he thought he understood the impulse to make a record of the names, to create a keepsake.

"When there's an accident and you lose someone, there's a body, you see the person, but here, many people have nothing left, nothing was found."

Samantha Gross can be reached at http://www.twitter.com/samanthagross