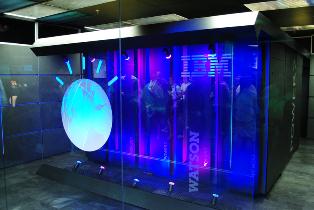 WHITE PLAINS, N.Y. (AP) -- Enough with the fun and games. Watson is going to work.

IBM's supercomputer system, best known for trouncing the world's best "Jeopardy!" players on TV, is being tapped by one of the nation's largest health insurers to help diagnose medical problems and authorize treatments.

WellPoint Inc., which has 34.2 million members, will integrate Watson's lightning speed and deep health care database into its existing patient information, helping it choose among treatment options and medicines.

"This very much fits into the sweet spot of what we envisioned for the applications of Watson," said Manoj Saxena, general manager of an IBM division looking at how the computer can be marketed.

"It's really a game-changer in health care," she said.

The WellPoint application will combine data from three sources: a patient's chart and electronic records that a doctor or hospital has, the insurance company's history of medicines and treatments, and Watson's huge library of textbooks and medical journals.

IBM says the computer can then sift through it all and answer a question in moments, providing several possible diagnoses or treatments, ranked in order of the computer's confidence, along with the basis for its answer.

"Imagine having the ability within three seconds to look through all of that information, to have it be up to date, scientifically presented to you, and based on that patients' medical needs at the moment you're caring for that patient," said WellPoint's chief medical officer, Dr. Sam Nussbaum.

Saxena said the WellPoint application would likely be accessed from an ordinary computer or hand-held device.

"We're really trying to bring providers a tool that's successful, that helps drive better outcomes, which is how we want to reimburse physicians in the future," Beer said.

Nussbaum said a pilot program will be rolled out early next year at several cancer centers, academic medical centers and oncology practices.

WellPoint is the nation's largest publicly traded health insurer based on enrollment. It operates Blue Cross Blue Shield plans in 14 states, including New York and California.

Neither party would say how much Armonk, N.Y.-based IBM is being paid. Saxena said it's the first money Watson has earned for the company; the $1 million it won on "Jeopardy!" earlier this year was given to charity.

Watson's next jobs will probably also be in health care, but financial services and public safety applications are on the horizon, Saxena said.