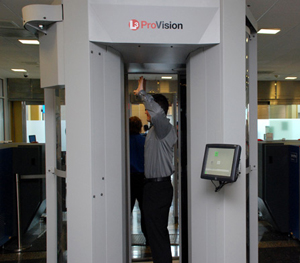 WASHINGTON (AP) -- Nearly 10 years after the September 2001 terror attacks, the U.S. government has significantly improved homeland security but still lacks a system to know who is leaving the country and exactly what is inside luggage checked at airports, according to a congressional audit.

The report from the Government Accountability Office, made public during a Senate hearing Wednesday before the Senate Homeland Security and Government Affairs Committee, concluded that, since the Homeland Security Department was organized in 2003, it completed about half the nearly 1,500 recommendations made by federal auditors. But there are still gaps, including the lack of a biometric exist system and enhanced explosive detection technology for checked baggage at airports.

"The bottom line of our report is a lot of progress has been made since 9/11 ... but there is work remaining to address gaps and weakness that will enable DHS to reach its full potential," U.S. Comptroller General Gene Dodaro told senators Wednesday.

Dodaro also said the department needs to work on technical, internal programs, including creating a consolidated financial system that combines information from all 22 DHS agencies.

Jane Holl Lute, the second-in-charge at the Homeland Security Department, agreed that there is still work to be done but said DHS has made improvements in securing cyber infrastructure, airport passenger screening, and security at the border with Mexico, among other things.

"We can detect threats sooner with better information and make adjustments more quickly based on real-time intelligence," Lute said. "Today we know more about those who seek to enter our country, what threats they may pose and what is needed to prevent potential problems from reaching our shores."

Lute said the department is improving how technology is bought and put into place. Programs that haven't worked, including the $1 billion SBInet program designed to create a virtual fence at the Mexican border, have been canceled.

Sen. Susan Collins, a Maine Republican, told Lute while she's appreciative of the work the department has done, she's concerned about the remaining gaps.

"Although DHS has bolstered the security of U.S. borders and identification documents, two Iraqi refugees associated with al-Qaida were recently arrested in Kentucky," Collins said. She was referring to the May arrest of two Iraqi men who were charged with trying to send weapons and money to al-Qaida operatives in their home country. "How a known bomb-maker whose fingerprints we have had on file for some time was able to enter our country on humanitarian grounds remains an unanswered and extremely troubling question."

Lute said the department is still reviewing the details of the case. She said she believes other Iraqis allowed into the U.S. on humanitarian grounds have been screened for security risks.

Collins also said she was concerned that the department remains spread out across 70 buildings at 40 different sites in and around Washington, saying that the situation causes problems with internal communications.

Lute and Dodaro both said DHS is working toward fixing the remaining problems, though neither gave the senators an exact time line.

During an intelligence conference in Washington earlier Wednesday, Homeland Security Secretary Janet Napolitano said that 10 years ago, law enforcement and the intelligence community were aware of potential threats to the U.S., but there wasn't a system in place at the time to anticipate and prevent threats and protect the country the way there is now, and the country is better prepared because of it.

Napolitano described the national terrorism advisory system - formerly the color-coded threat warning system that she revamped in the past year, getting rid of the colors in favor of more descriptive language for the public about current threats. She also emphasized the importance of public awareness in thwarting terrorism and noted that the vigilance the department is promoting through it's "If You See Something, Say Something" campaign has already saved lives.

Napolitano cited a 2010 study by a North Carolina-based research consortium, and said one-third of terror plots against Americans - motivated by a range of ideologies and not just al-Qaida - were thwarted in part because of information provided by the public. The study, by the Institute for Homeland Security Solutions, looked at plots between 1999 and 2009.