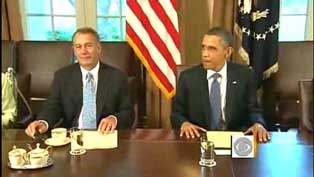 RICHMOND, Va. (AP) -- His sleeves rolled up and his finger stabbing the air, President Barack Obama pitched his newly unveiled jobs plan with campaign-style fervor Friday, urging Americans to pressure their lawmakers to pass his $447 billion initiative. "We're tougher than these times," he declared. "We are bigger than the smallness of our politics."

Venturing out of Washington to promote his initiative, Obama's first stop after addressing a joint session of Congress Thursday was on the home turf of one of his top Republican antagonists. Speaking at the University of Richmond, in the district represented by House Majority Leader Eric Cantor, Obama made a full-throated appeal for public support, punctuating his remarks with a sharp refrain: "Pass this bill!"

"It will jump start an economy that has stalled," Obama said, conceding that a nation stuck at 9.1 percent unemployment is no longer in recovery.

More than 8,000 people packed an arena on the campus for an assembly that had all the feel of a political rally. The largely supportive crowd cheered enthusiastically as Obama outlined details of his jobs plan and broke into chants of "USA!" when the president ensured that America can compete with growing global powerhouses like China.

It was the first of many expected efforts by the president to rally public support for his program. Next week he plans to go to Columbus, Ohio, a city represented by Republican congressmen and a state that is home to House Speaker John Boehner.

The White House said the choice of destination had more to do with Richmond's proximity to Washington than taking a jab at the Virginia Republican, who has been one of the president's fiercest critics. Cantor did say Friday morning that he'd be willing to work with the White House on a job-creation plan so long as Obama doesn't pursue an "all-or-nothing" strategy.

After a summer of gridlock and intense partisan fighting over raising the nation's debt ceiling, Obama said he still held out hope that Republicans would rally behind his proposals and applauded the compromising tone set recently by Boehner and Cantor.

"I know that folks sometimes think they've used up the benefit of the doubt but I'm an eternal optimist, I'm an optimistic person," he said. "I believe if you just stay at it long enough, after they've exhausted all the other options, folks do the right thing."

Cantor planned to hold his own event in Richmond later Friday, speaking about his party's plans for job growth at a local business.

The plan the president laid out Thursday night in a nationally televised speech contains $253 billion in tax cuts and $194 billion in new spending. It would increase and extend a Social Security payroll tax cut for workers. It also provides a tax cut to employers. Most of Obama's proposals stand little chance of being implemented without the backing of congressional Republicans.

Still, eager to apply pressure on Republicans and make a case for the plan, the White House distributed analyses by outside economists that estimated the plan could create up to 1.9 million jobs. These economists cautioned, however, that the effects would be temporary and that the long-term impact of the plan would depend on the ability of the economy to build momentum and sustain growth on its own.