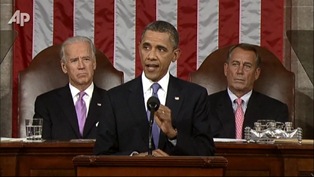 WASHINGTON (AP) -- Typical workers would get an extra $1,500 in their paychecks next year under a plan by President Barack Obama to expand a payroll tax cut that is scheduled expire at the end of the year. Higher paid workers would get more, and businesses would get tax breaks, too.

The tax cuts are part of a nearly $450 billion package of tax reductions and new spending designed to revive the economy and entice employers to hire more workers at a time when the national unemployment rate is stuck at 9.1 percent.

The goal of cutting payroll taxes is to increase take-home pay for workers in the hope they will spend the money, creating more demand for consumer goods and services. Under Obama's plan, workers making $50,000 a year would see their take-home pay boosted by $1,550 next year; those making $100,000 would get $3,100.

Economists say the president's jobs package could go a long way toward preventing the economy from getting worse, but significantly boosting job growth will be harder to achieve.

"The thing that is going to induce firms to hire is having demand for their product," said Roberton Williams, a former tax analyst at the Congressional Budget Office who is now a senior fellow at the Tax Policy Center. "If they see brighter skies ahead, they'll start hiring people to meet the demand. But until they see the promise of that, they are going to be very leery of expanding their payroll, and it doesn't matter whether you're subsidizing the cost of hiring a new worker or subsidizing the cost of an investment."

Mark Zandi, one of several economists asked by the White House to evaluate the president's proposal ahead of his speech, said that if enacted the plan would add 1.9 million jobs and reduce the unemployment rate by 1 percentage point. Zandi is chief economist for Moody's Analytics.

In December, Congress passed a one-year cut in Social Security taxes, reducing the rate for workers from 6.2 percent to 4.2 percent for 2011. Employers still pay the 6.2 percent rate, which is applied to wages up to $106,800.

Obama proposes to extend the tax cut for a year and make it bigger - reducing the Social Security taxes paid by workers to 3.1 percent for 2012. Obama's plan also would cut in half - to 3.1 percent - the Social Security taxes paid by businesses on the first $5 million of their payroll. About 98 percent of firms have payrolls below the $5 million threshold, according to the White House.

Companies that increase their payroll in 2012 - through new hires or pay raises - would be exempt from paying Social Security taxes on the increased payroll, with a cap of $50 million.

In all, the payroll tax cuts would save workers $175 billion next year, and employers $65 billion, according to the White House.

Among the other tax provisions:

- A tax credit of up to $4,000 for hiring workers who have been unemployed more than six months.

- A tax credit of up to $5,600 for hiring military veterans who have been out of work more than six months.

- A tax credit of up to $9,600 for hiring military veterans with service-related disabilities who have been out of work more than six months.

- An extension of tax provisions that enable companies to more quickly write off the cost of new equipment, saving companies an estimated $5 billion.

Obama said he would introduce a new deficit reduction plan in the coming weeks that would more than cover the cost of his jobs package. He said the plan would couple future spending cuts with tax increases for the wealthy and the elimination of some tax breaks for corporations. Tax increases will be a tough sell in Congress.

"The president's plan is nothing new," said Sen. Orrin Hatch of Utah, the top Republican on the Senate Finance Committee. "It simply doubles down on the same failed policies that he has pursued before. And I don't expect they will be any more successful than they were the first time around."

Vice President Joe Biden said Friday the administration is prepared to hear rival Republican proposals, particularly if they come up with "a better idea."

At the same time, Biden said on a morning television program that Obama is "not prepared to compromise in terms of doing nothing." He said many Americans are "hanging on the edge" and need Washington's urgent attention.

House Republican leader Eric Cantor said he was happy to hear Biden's statements and that the GOP is prepared to work with the administration on a job-creation program as long as the White House doesn't pursue an "all-or-nothing" approach.

Even though the White House says Social Security would be reimbursed for the lost revenue, some seniors' groups are concerned that reducing payroll taxes could threaten the retirement and disability program.

"This proposal to extend and expand the payroll tax cut threatens Social Security's independence by forcing the program to compete for limited federal dollars from general revenues, and by breaking the link between contributions and benefits," said Max Richtman, president and CEO of the National Committee to Preserve Social Security and Medicare. "As we predicted back in December, there's no such thing as a temporary tax cut."

Biden and Cantor appeared on CBS's "The Early Show."