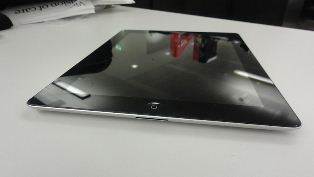 HARTFORD, Conn. (AP) -- For incoming freshmen at western Connecticut's suburban Brookfield High School, hefting a backpack weighed down with textbooks is about to give way to tapping out notes and flipping electronic pages on a glossy iPad tablet computer.

A few hours away, every student at Burlington High School near Boston will also start the year with new school-issued iPads, each loaded with electronic textbooks and other online resources in place of traditional bulky texts.

While iPads have rocketed to popularity on many college campuses since Apple Inc. introduced the device in spring 2010, many public secondary schools this fall will move away from textbooks in favor of the lightweight tablet computers.

Apple officials say they know of more than 600 districts that have launched what are called "one-to-one" programs, in which at least one classroom of students is getting iPads for each student to use throughout the school day.

Nearly two-thirds of them have begun since July, according to Apple.

New programs are being announced on a regular basis, too. As recently as Wednesday, Kentucky's education commissioner and the superintendent of schools in Woodford County, Ky., said that Woodford County High will become the state's first public high school to give each of its 1,250 students an iPad.

At Burlington High in suburban Boston, principal Patrick Larkin calls the $500 iPads a better long-term investment than textbooks, though he said the school will still use traditional texts in some courses if suitable electronic programs aren't yet available.

"I don't want to generalize because I don't want to insult people who are working hard to make those resources," Larkin said of textbooks, "but they're pretty much outdated the minute they're printed and certainly by the time they're delivered. The bottom line is that the iPads will give our kids a chance to use much more relevant materials."

The trend has not been limited to wealthy suburban districts. New York City, Chicago and many other urban districts also are buying large numbers of iPads.

The iPads generally cost districts between $500 and $600, depending on what accessories and service plans are purchased.

By comparison, Brookfield High in Connecticut estimates it spends at least that much yearly on every student's textbooks, not including graphing calculators, dictionaries and other accessories they can get on the iPads.

They include interactive programs to demonstrate problem-solving in math, scratchpad features for note-taking and bookmarking, the ability to immediately send quizzes and homework to teachers, and the chance to view videos or tutorials on everything from important historical events to learning foreign languages.

They're especially popular in special education services, for children with autism spectrum disorders and learning disabilities, and for those who learn best when something is explained with visual images, not just through talking.

Some advocates also say the interactive nature of learning on an iPad comes naturally to many of today's students, who've grown up with electronic devices as part of their everyday world.

But for all of the excitement surrounding the growth of iPads in public secondary schools, some experts watching the trend warn that the districts need to ensure they can support the wireless infrastructure, repairs and other costs that accompany a switch to such a tech-heavy approach.

And even with the most modern device in hand, students still need the basics of a solid curriculum and skilled teachers.

"There's a saying that the music is not in the piano and, in the same way, the learning is not in the device," said Mark Warschauer, an education and informatics professor at the University of California-Irvine whose specialties include research on the intersection of technology and education.

"I don't want to oversell these things or present the idea that these devices are miraculous, but they have some benefits and that's why so many people outside of schools are using them so much," he said.

One such iPad devotee is 15-year-old Christian Woods, who starts his sophomore year at Burlington, Mass., High School on a special student support team to help about 1,000 other teens adjust to their new tablets.

"I think people will like it. I really don't know anybody in high school that wouldn't want to get an iPad," he said. "We're always using technology at home, then when you're at school it's textbooks, so it's a good way to put all of that together."

Districts are varied in their policies on how they police students' use.

Many have filtering programs to keep students off websites that have not been pre-approved, and some require the students to turn in the iPads during vacation breaks and at the end of the school year. Others hold the reins a little more loosely.

"If we truly consider this a learning device, we don't want to take it away and say, `Leaning stops in the summertime.' " said Larkin, the Burlington principal.

And the nation's domestic textbook publishing industry, accounting for $5.5 billion in yearly sales to secondary schools, is taking notice of the trend with its own shift in a competitive race toward developing curriculum specifically for iPads.

The publisher's HMH Fuse algebra program, which became available at the start of the 2010 school year, was among the first and is a top seller to districts. Another algebra program and a geometry offering are coming out now.

The HMH Fuse online app is free and gives users an idea of how it works, and the content can be downloaded for $60. By comparison, the publisher's 950-page algebra text on which it was based is almost $73 per copy, and doesn't include the graphing calculators, interactive videos and other features.

For a school that would buy 300 of the textbooks for its freshman class, for instance, the savings from using the online version would be almost $4,000.

Jay Diskey, executive director of the Association of American Publishers' schools division, said all of the major textbook publishers are moving toward electronic offerings, but at least in the short term, traditional bound textbooks are here to stay.