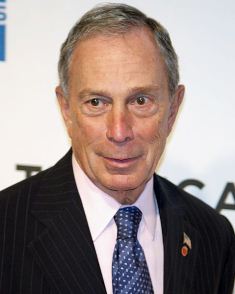 NEW YORK (AP) -- Mayor Michael Bloomberg on Tuesday blamed illegal handguns for a shooting that killed three people and wounded two police officers a few blocks from the route of the annual West Indian Day Parade in Brooklyn, saying federal officials have not had the "courage" to take steps to control gun use.

Bullet fragments hit one police officer in the left arm and chest Monday night. He was hospitalized but was expected to survive. Another officer was grazed by a bullet. Two shooters were killed along with a bystander, 56-year-old Denise Gay, who was shot while sitting on a stoop with her daughter nearby just two doors down from the exchange of gunfire.

Bloomberg said Gay's death was "a senseless murder, and another painful reminder I think of what happens when elected officials in Washington fail to take the problem of illegal guns seriously."

Police Commissioner Raymond Kelly said the gunman who killed Gay had an extensive criminal history, including criminal possession of a firearm and assault and drug charges.

"This is a national problem requiring national leadership," Bloomberg said, "but at the moment neither end of Pennsylvania Avenue has had the courage to take basic steps that would save lives."

The gunshots rang out just after 9 p.m. Monday in Brooklyn's Crown Heights neighborhood after the hours-long parade, which also was marred by fatal shootings in 2003 and 2005. Post-parade parties are common, but police wouldn't say if Monday's fatal shooting was related to the parade.

The shootings started as an exchange between two armed men, and when officers who had been assigned to parade duties arrived at the scene, they were fired upon and returned fire, police said.

Witnesses said the shooting went on for at least 30 seconds. Thomas Kaminsky, who lives near where the shootings occurred, said it sounded like machine-gun fire outside his building.

Earlier Monday, as revelers filled the streets in colorful costumes during the parade, gun violence brought the festivities to a stop in spots, scattering the panicked crowd. Police said four people were shot and wounded along the parade route and a 15-year-old boy was grazed by a bullet nearby.

A City Council member was briefly detained after getting into a confrontation with police after the parade.

On Tuesday, residents said the area of Crown Heights where the woman was fatally shot on her stoop is normally safe.

"This is a good neighborhood; this is not normal here," said Dennis McGreevy, 44, who said he heard about the violence while he was at a nearby bar Monday.

The neighborhood of mostly three- or four-story brick and limestone buildings is a few blocks from the parade route in a rapidly changing area of Crown Heights that boasts organic grocery stores and hip coffee shops along with West Indian businesses.

The holiday weekend was particularly violent and included a Sunday shooting in the Bronx in which eight people, including children, were wounded. Four other people were shot, one fatally, in the East Flatbush section of Brooklyn early Monday.

The upcoming 10th anniversary of the Sept. 11 terror attacks and holiday weekend violence had put the city "on heightened alert," Kelly said before the parade stepped off.

Police helicopters hovered overhead during the parade, and officers on scooters and on foot patrolled the surrounding blocks.

Bloomberg held a news conference early Tuesday morning at Brooklyn's Brookdale University Hospital where Officer Omar Medina, 36, was in stable condition and being treated for shrapnel wounds to his left arm, chest and calf, according to an NYPD spokeswoman.

Officer Avichaim Dicken, whose arm was grazed, was at New York Methodist Hospital, also in stable condition, according to the department.

Bloomberg said he and Kelly had been discussing the problem of illegal guns on Monday morning and how there is an urgent need for federal action.

He said New York City has had four of its safest years "because we have taken unprecedented steps to stem the flow of illegal guns onto our streets. But we cannot do it alone."

Before the violence Monday, the parade thundered down a Brooklyn thoroughfare with its usual colorful, musical energy.

The annual Labor Day parade celebrates the culture of the Caribbean islands and is one of the city's largest outdoors events. Modeled on traditional Carnival festivities, it features dancers wearing enormous feathered costumes, music and plenty of food.