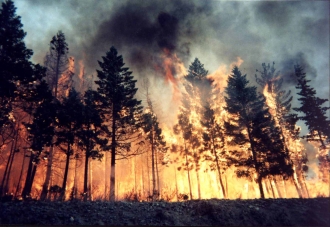 ALBUQUERQUE, N.M. (AP) -- This summer's Las Conchas fire in New Mexico scorched tribal lands, threatened one of the nation's premier nuclear facilities and pushed bears into nearby cities. But it somehow spared more than 9,000 marijuana plants in a remote area of Bandelier National Monument.

Officials said no arrests have been made in the sophisticated growing operation in the park's backcountry. But authorities said Friday they were looking for at least two suspects. They estimate the plants were 6 to 10 feet tall had a street value of around $10 million.

"It was a lot larger than we anticipated," park superintendent Jason Lott said. "It (was) much bigger and more sophisticated than we ever expected."

The marijuana operation had an irrigation system and a possible evacuation route for those overseeing the plants, Lott said. Temporary housing structures, trash and food caches were also found nearby.

The pot was discovered in rugged terrain during an Aug. 23 helicopter flight surveying a flash flood, Lott said. That flooding was caused when monsoonal rains fell on the charred area of the monument, where soil and rocks had been loosened by the fire, the largest in New Mexico history.

A number of local and federal law enforcement agencies raided the area early Thursday morning. No one was captured but investigators say at least two men were seen at the grow site earlier in the week.

The Bernalillo County Sheriff's Office and the New Mexico National Guard both lent helicopters to the operation and a National Guard Blackhawk helicopter airlifted the marijuana out, the National Park Service said. Most of it was transported to an undisclosed location for proper disposal and some was retained for testing as evidence.

The Las Conchas fire burned more than 244 square miles over 36 days in the mountains surrounding the town of Los Alamos and the Los Alamos National Laboratory.

The fire started June 26 when a tree fell on a power line. The flames raced across parts of the monument, Valles Caldera National Preserve and lands belonging to northern New Mexico pueblos.