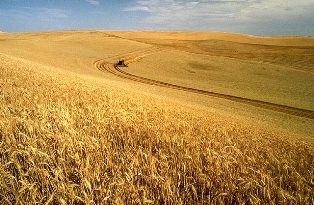 PLAZA, N.D. (AP) -- Consumers are paying more for pasta after heavy spring rain and record flooding prevented planting on more than 1 million acres in one of the nation's best durum wheat-growing areas.

North Dakota typically grows nearly three-fourths of the nation's durum, and its crop is prized for its golden color and high protein. Pasta makers say the semolina flour made from North Dakota durum produces noodles that are among the world's best.

In northwest North Dakota, fields normally flush with wheat are full of frogs. That, combined with a smaller-than-usual stockpile in the U.S., has pushed up prices on everything from alphabet noodles to ziti. The cost of pasta jumped about 20 cents in the past few months to an average of about $1.48 a pound nationwide, said Walt George, president of Kansas City, Mo.-based American Italian Pasta Co., the nation's largest maker of dry pasta.

Keith Deutsch and his wife, Laurie, seeded only half of their normal 900 acres of durum this year, the poorest planting on their farm in Plaza since his family began raising the crop some 60 years ago.

"This is the worst I've seen for wetness," said Keith Deutsch, president of the Bismarck-based U.S. Durum Growers Association. "At least in a drought year, we can still get the crop in."

The U.S. Department of Agriculture estimates North Dakota farmers planted only 800,000 acres of durum this spring, down from 1.85 million acres last year and the least since 1958. About one-fourth of North Dakota farms grow durum, which competes for acreage with hard spring wheat, a hardier crop used to make bread.

George Mazzuca said he and his partners are having difficulty getting durum for their fledgling business in Boulder, Colo. They started Rocky Mountain Noodles this year with the intention of supplying area restaurants and grocers with gourmet specialty pastas.

"We want Dakota durum because taste is going to be everything with our product," he said.

The durum market in North Dakota is at a near standstill, with growers hanging on to their wheat and most pasta makers reluctant to buy until the end of the harvest, which has just begun, said Erica Olson, marketing specialist for the North Dakota Wheat Commission. North Dakota durum fetched about $15 a bushel this spring but has dropped to about $11, due to the lack of buying and selling.

Still, that's about twice what it sold for at this time last year, she said.

While prices may be higher, pasta will be available. World production of durum is expected to increase to 1.3 billion bushels this year, up 3 percent from last year with better harvests in North Africa and Canada, the London-based International Grains Council reported.

And in North Dakota, Deutsch said the wheat that was planted looks good, although farmers must get it in the bin before the frost begins.

The durum difficulties are just part of a weak year overall for North Dakota farmers. Doug Goehring, the state agriculture commissioner, said losses to all crops from flooding and heavy rains will be at least $1.5 billion. The state led the nation last year in production of 14 crops, but is likely to lose its top ranking in peas, pinto and navy beans, lentils and possibly barley, he said.

However, the drop in durum production is what will cause a global ripple.

"This is one of the few crops we have that can have such an immediate impact on the consumer," Goehring said. "This year, they will experience higher pasta prices."