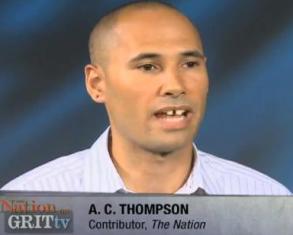 The 33-page report slams a former New Orleans police supervisor -- who resigned last month while facing disciplinary charges -- for his handling of the probe into the death of Henry Glover, who was murdered by a police officer in 2005.

I first reported on the circumstances of Glover's death in a story published by ProPublica and The Nation magazine in late 2008. Subsequently, I collaborated with PBS "Frontline" and reporters with the New Orleans Times-Picayune on "Law & Disorder," a documentary that looked more deeply at the Glover case, as well as the larger torrent of police violence that followed Hurricane Katrina.

Assistant Superintendent Marlon Defillo -- who served as second-in-command at the troubled police department -- is the highest-ranking officer to be tainted by the Glover case, which culminated with a high-profile murder trial last year.

Using harsh language, the state police report faults Defillo for "a lack of both good judgment and maturity," and lambastes him for failing to make more than the most minimal effort to look into the killing of Glover, a father of four whose burnt remains were discovered on a Mississippi River levee during the aftermath of Hurricane Katrina.

Defillo, notes the report, didn't even contact Glover's family. "That would seem to be an incredibly basic and elementary step -- call the family and ask what happened," the investigators found. Had he done so, "Defillo would have learned that Glover was likely the victim of a police shooting and his body was later burned by officers from NOPD."

Defillo has maintained that he did nothing wrong. Contacted for comment last night, his attorney, Robert Jenkins, said he needed to speak with Defillo before making a statement.

The report also features some intriguing details about Defillo's response to my inquiries about Glover. Defillo told the state police that when he learned I was examining Glover's killing in 2008, he assumed I was preparing a "scathing" media report based on another wild Katrina rumor. But he apparently did little to figure out why I was poking around, and didn't notify then-chief Warren Riley about the allegations that Glover's death and the desecration of his body were linked to the police.

And when the stories on Glover's death began appearing -- in print, online and on television -- he didn't bother to check them out. "[T]he administrative malaise that had beset Defillo's investigative follow-up efforts also smothered any effort to try to search out media reports of a police shooting," notes the state police report. "He claims to this day he has not read the published reports, a revelation that is shocking to investigators."
ProPublica is a Pulitzer prize winning journalism nonprofit