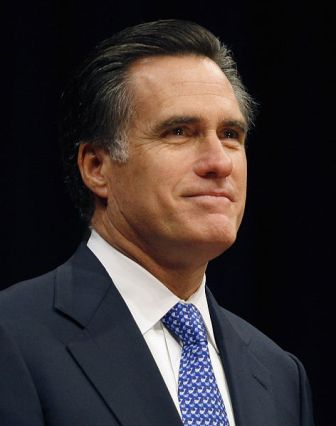 That may change soon, however, as events shift the contest to a higher gear. September will bring several GOP debates that will include Texas Gov. Rick Perry for the first time, as well as renewed attention to the question of how to create desperately needed jobs.

The former Massachusetts governor may be pushed out of his comfort zone even sooner if Perry's fast rise seems real and lasting.

For months, Romney has largely floated above the sparring. He let Michele Bachmann knock fellow Minnesotan Tim Pawlenty out of the race in Iowa, for instance, and refused to be drawn into tit-for-tat exchanges over policy details. Perry, the sudden favorite among Republicans according to a Gallup poll, may force Romney to turn his focus away from Obama and sharpen his differences with fellow Republicans.

This week, however, Romney stuck to an easygoing, business-as-usual air as he campaigned in New Hampshire, which will hold the first primary in about five months. He took a cautious stand on climate change, downplayed GOP differences on jobs policies, and shrugged off suggestions that Perry may have overtaken him.

"If you're running for president, your focus should be on the person who is president and his failures, and how you're going to make America better," Romney told reporters in Claremont.

About the only thing he changed this week, he said with a laugh, was his shirt.

He cut short a question about the Gallup poll. There are many polls, Romney said, although he conceded, "Rick is a very effective candidate."

Romney still enjoys a big lead in fundraising and organization over Perry and the others. For now, he seems eager to blunt rather than highlight his differences with them, a classic front-runner's strategy.

At a packed forum in Keene on Wednesday, Romney noted that he and all the other contenders have vowed to reject a deficit-reduction package if it contains even $1 in new tax revenues for every $10 in spending cuts. Obama called that pledge irresponsible pandering.

"We all have said taxes are off the table," Romney said. He later told reporters they should not be surprised if his job proposals hardly differ from his rivals', because Republicans share many values on that issue.

Romney repeatedly called for a balanced federal budget, but like many other politicians he offered few details on how to achieve it. He embraced House Republicans' demands for unspecified cuts in discretionary domestic spending.

When a man in Keene asked what sacrifices Americans should make, Romney offered a largely pain-free roster.

Americans should "work hard" and create new businesses, he said, but they need not "give more money to government." Young people should study harder and "demand more from teachers," he said, and learn that esteem comes from "living with integrity and getting married before they have kids."

"The sacrifice I look for is for Americans to reach for excellence and greatness," Romney said to applause.

Romney often asked voters to trust him to make good decisions as president, with details to come as events unfold.

"I'll find the right approach" to ending sanctuary cities if legally possible, he said. Sanctuary cities take a hands-off approach to pursuing illegal immigrants, and Romney said he opposed them as governor.

On Thursday in Exeter, Romney said he would look "at the widest array of options" to shore up the long-term fiscal health of Medicare and Social Security. At other stops he said the retirement age for eligibility possibly could be raised over time.

Asked what he would do as president if he had a GOP-controlled Congress, Romney immediately veered to unrelated praise of right-to-work states, which ban mandatory union participation.

He took a non-committal stand on climate change at a forum in Lebanon, N.H. Humans probably contribute to global warming, he said, but "I don't know by how much." He noted he's not a scientist and said he didn't want to spend trillions of dollars on carbon-reduction programs for "something we don't know the answer to."

Some voters asked Romney about health care, reminding him of his successful push for mandatory health insurance coverage in Massachusetts. At every stop he said he would overturn "Obamacare," a sure-fire applause line. But he skated over similarities between the president's health delivery overhaul and his own push in Massachusetts several years ago.

Romney said the state law was needed because some people took advantage of a system that let them get free treatment in emergency rooms without buying insurance. That's also an argument Obama made for requiring health coverage nationwide.

The Massachusetts law isn't perfect, Romney said, and voters can overturn it by referendum if they like. The Obama-backed law, he said, reaches far more deeply into health affairs for all Americans, and would reduce Medicare spending.

Many New Hampshire voters seemed satisfied with his proposals and answers.

Bill Tingle, 64, said he voted for Obama in 2008 but is looking favorably at Romney. He likes Romney's overall approach to jobs and the budget, but wishes there had been more talk about foreign affairs, said Tingle, who travels widely for a manufacturing company.

The crowds were almost always friendly, although Romney grew testy when a woman in Lebanon pressed him to acknowledge that many Americans depend on government programs Republicans want to cut. In four events in two days, the only question he got about his plans to greatly expand his Southern California house came from a reporter. Romney, a multimillionaire, said he wants room for his 16 grandchildren.

The press corps turned to other matters.