GOP May Ok Tax Increase that Obama Hopes to Block 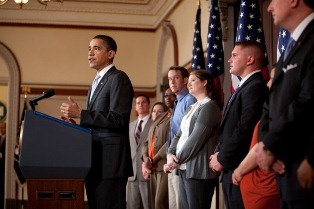 Impossible, right? GOP lawmakers are so virulently anti-tax, surely they will fight to prevent a payroll tax increase on virtually every wage-earner starting Jan. 1, right?

Many of the same Republicans who fought hammer-and-tong to keep the George W. Bush-era income tax cuts from expiring on schedule are now saying a different "temporary" tax cut should end as planned. By their own definition, that amounts to a tax increase.

The tax break extension they oppose is sought by President Barack Obama. Unlike proposed changes in the income tax, this policy helps the 46 percent of all Americans who owe no federal income taxes but who pay a "payroll tax" on practically every dime they earn.

There are other differences as well, and Republicans say their stand is consistent with their goal of long-term tax policies that will spur employment and lend greater certainty to the economy.

"It's always a net positive to let taxpayers keep more of what they earn," says Rep. Jeb Hensarling, "but not all tax relief is created equal for the purposes of helping to get the economy moving again." The Texas lawmaker is on the House GOP leadership team.

The debate is likely to boil up in coming weeks as a special bipartisan committee seeks big deficit reductions and weighs which tax cuts are sacrosanct.

At issue is a tax that the vast majority of workers pay, but many don't recognize because they don't read, or don't understand their pay stubs. Workers normally pay 6.2 percent of their wages toward a tax designated for Social Security. Their employer pays an equal amount, for a total of 12.4 percent per worker.

As part of a bipartisan spending deal last December, Congress approved Obama's request to reduce the workers' share to 4.2 percent for one year; employers' rate did not change. Obama wants Congress to extend the reduction for an additional year. If not, the rate will return to 6.2 percent on Jan. 1.

Obama cited the payroll tax in his weekend radio and Internet address Saturday, when he urged Congress to work together on measures that help the economy and create jobs. "There are things we can do right now that will mean more customers for businesses and more jobs across the country. We can cut payroll taxes again, so families have an extra $1,000 to spend," he said.

Social Security payroll taxes apply only to the first $106,800 of a worker's wages. Therefore, $2,136 is the biggest benefit anyone can gain from the one-year reduction.

The great majority of Americans make less than $106,800 a year. Millions of workers pay more in payroll taxes than in federal income taxes.

The 12-month tax reduction will cost the government about $120 billion this year, and a similar amount next year if it's renewed.

That worries Rep. David Camp, R-Mich., chairman of the tax-writing Ways and Means Committee, and a member of the House-Senate supercommittee tasked with finding new deficit cuts. Tax reductions, "no matter how well-intended," will push the deficit higher, making the panel's task that much harder, Camp's office said.

But Republican lawmakers haven't always worried about tax cuts increasing the deficit. They led the fight to extend the life of a much bigger tax break: the major 2001 income tax reduction enacted under Bush. It was scheduled to expire at the start of this year. Obama campaigned on a pledge to end the tax break only for the richest Americans, but solid GOP opposition forced him to back down.

Many Republicans are adamant about not raising taxes but largely silent on what it would mean to let the payroll tax break expire.

Republicans cite key differences between the two "temporary" taxes, starting with the fact that the Bush measure had a 10-year life from the start. To stimulate job growth, these lawmakers say, it's better to reduce income tax rates for people and for companies than to extend the payroll tax break.

"We don't need short-term gestures. We need long-term fundamental changes in our tax structure and our regulatory structure that people who create jobs can rely on," said Sen. Lamar Alexander, R-Tenn., when asked about the payroll tax matter.

The nonpartisan Congressional Budget Office says payroll tax reductions give the economy a short-term boost. But it says the benefit is bigger if employers get the tax break instead of, or along with, workers.

Some top Republicans have taken a wait-and-see approach, expecting the payroll tax issue to be a bargaining chip in the upcoming debt reduction talks.

Neither House Speaker John Boehner, R-Ohio, nor Senate Minority Leader Mitch McConnell, R-Ky., has taken a firm stand on whether to extend the one-year tax cut.

Former House speaker Newt Gingrich said Republicans will fall under increasing pressure to extend the payroll tax cut. If they refuse, he said in a recent speech, "we're going to end up in a position where we're going to raise taxes on the lowest-income Americans the day they go to work."

Many Democrats also are ambivalent about Obama's proposed tax cut extension. They are more focused on protecting social programs from deep spending cuts. Some worry that a multiyear reduction in the tax designated for Social Security could undermine that program's health and stature.

For decades the payroll tax generated more revenue than the Social Security paid out in benefits. The excess was used to fund other government operations. Last year, however, Social Security benefits began outstripping revenue from its designated sources, forcing the program to start tapping its "trust fund" of government obligations.