Wisconsin GOP's Senate Edge Stays at One After Recalls 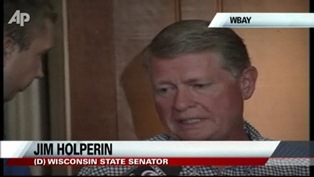 Republicans lost two seats in the state Senate through the recalls, one short of the three Democrats needed to retake the majority. All three Democrats targeted for recall, including two on Tuesday night, were victorious. Following their two defeats, the Republican majority in the Senate narrowed to 17-16.

More than $40 million was estimated to have been spent on the recalls, with most of it pouring in from national unions and independent conservative groups, as the battle in Wisconsin took on national implications in advance of the 2012 presidential race.

Democrats still say they plan to launch a recall of Walker next year, but at least for a few months the political turmoil that rocked Wisconsin with the unveiling of Walker's union bill in February should subside.

Walker is already trying to moderate, saying after the two Republican losses last week and the release of a poll showing a 59 percent disapproval rating that he wanted to work in a more bipartisan way with Democrats. His spokesman Cullen Werwie reiterated that message after the two Democratic wins Tuesday.

"With the uncertainty of the recalls over, the governor is looking forward to working together with the Legislature and job creators to get more Wisconsinites back to work," Werwie said.

Democrats, still stung by Walker's pushing through of the collective bargaining bill without compromises, were skeptical.

"I believe the governor is afraid for his job and is talking in moderate terms," said Democratic Sen. Bob Wirch of Pleasant Prairie, who along with Sen. Jim Holperin of Conover held on to their seats Tuesday. "I will believe him when he backs it up with action."

Wisconsin Democratic Party Chairman Mike Tate said Democrats have "fundamentally changed the face of power in the Wisconsin Legislature" through the recalls. Even though Republicans remain in the majority, Tate said Democrats' picking up two seats and making gains in Republican districts sets the table for big wins next year.

"It's really hard to go five for nine and not be pleased of the progress that we made," he said.

Republican Senate Majority Leader Scott Fitzgerald said in a statement that he was proud the GOP maintained its majority through the recalls and, in his own combative way, also issued a call for bipartisanship.

"The problems facing our state are too serious for these political games, and the Democrats' permanent campaign cycle," Fitzgerald said. "The Democrats need to start working with the other side of the aisle, not just moving on to their next recall target."

"Liberals should stop distracting voters with expensive recall elections and start helping Gov. Scott Walker and the Republicans get Wisconsin back to work," Priebus said in a statement.

Wirch said what voters want is moderation and compromise.

"They're sick and tired of the extremism they're getting out there," Wirch said.

Wirch, who was first elected to the Assembly in 1992 and the Senate in 1996, defeated Kenosha attorney Jonathan Steitz with 58 percent of the vote based on unofficial results. His district covers the city of Kenosha and surrounding area in southeast Wisconsin near the Illinois border.

Robert Merton, 73, a retired firefighter from Pleasant Prairie, said he voted for Wirch on Tuesday because the senator has always stood up for unions and middle-class values.

But another Pleasant Prairie voter said he couldn't forgive Wirch for fleeing the state rather than staying to express his objections in Madison. Don Camacho, a 61-year-old sales representative in the manufacturing industry, said he voted for Wirch in the past but this time chose Steitz because Wirch abandoned his constituents.

"I was (ticked) off at him for leaving the state," Camacho said. "He got elected to do a job. He should have done it."

Holperin, who won with 54 percent of the vote based on unofficial results, said the election showed that not everyone disapproved of Democrats leaving the state during the heated collective bargaining debate.

"Voters apparently think that was more of a good thing than a bad thing," he said.

Holperin is the first state-level elected official in U.S. history to have faced two recall attempts. He survived one in 1990 as a member of the state Assembly after he was targeted for supporting tribal spearfishing rights.

In that race, Holperin spent $56,000. So far this time he's spent at least $319,000 and combined with spending from outside groups and his tea party Republican opponent Kim Simac, total spending is estimated to be at least $4.5 million.

It's estimated that total spending may break $40 million on the nine recall races combined.

The nine recall elections in Wisconsin this year were the largest ever in the nation's history. Previously, in nearly 100 years there had been only 20 recall attempts, including Holperin's, with just 13 successful.

With the ouster of two Republicans last week, of the 15 state-level office holders recalled nationwide, four of them have been from Wisconsin.