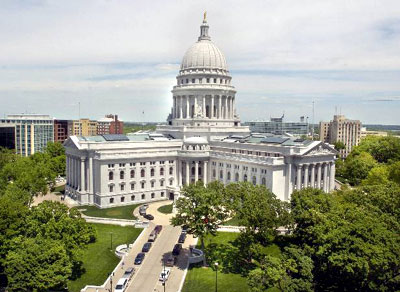 Democrats needed to win at least three of six recalls last week targeting Republicans, but they only captured two. That means the best they can manage from Tuesday's elections is to keep the ground they gained, which left the Senate in Republican control by a narrow 17-16 margin.

A pair of Republican wins Tuesday would leave the Senate in the same partisan split as it was before the recalls.

On the ballot were Sens. Bob Wirch of Pleasant Prairie and Jim Holperin of Conover. Holperin is the first state-level elected official in U.S. history to have faced two recall attempts. He survived one in 1990 as a member of the state Assembly after he was targeted for supporting tribal spearfishing rights.

In that race, Holperin spent $56,000. So far this time he's spent at least $319,000 and combined with spending from outside groups and his tea party Republican opponent Kim Simac, total spending is estimated to be at least $4.5 million.

The high spending in that race shows that both sides see it as competitive, especially compared to the Wirch race where about half has much has been spent, as estimated by the watchdog group the Wisconsin Democracy Campaign.

Wirch, who was first elected to the Assembly in 1992 and the Senate in 1996, faces first-time candidate Jonathan Steitz, a Kenosha attorney who moved into the district 10 years ago.

The Senate district covers the city of Kenosha and surrounding area in southeast Wisconsin near the Illinois border.

Holperin, who served 12 years in the Assembly between 1983 and 1995 before being elected to the Senate in 2008, faces Simac of Eagle River. She founded the Northwoods Patriots and would be the first tea party candidate elected to the Wisconsin state Senate if she wins.

The nine recall elections in Wisconsin this year were the largest ever in the nation's history. Previously, in nearly 100 years there had been only 20 recall attempts, including Holperin's, with just 13 successful.

With the ouster of two Republicans last week, of the 15 state-level office holders recalled nationwide, four of them have been from Wisconsin.

Wisconsin Democratic party leaders say they are moving ahead with plans to mount an effort to recall Walker next year, even though Republicans retained their majority in the Senate.