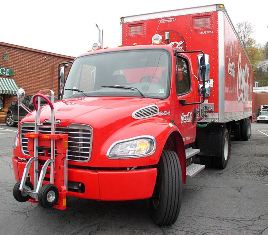 WASHINGTON (AP) -- Fire trucks and concrete mixers, semis, heavy-duty pickups and all trucks in between will, for the first time, have to trim fuel consumption and emissions of heat-trapping gases under new efficiency standards announced Tuesday by President Barack Obama.

The White House said the standards will save businesses billions of dollars in fuel costs, help reduce oil consumption and cut air pollution. The standards apply to vehicle model years 2014 to 2018.

The new targets affect three categories of vehicles. Big rigs or semis will have to slash fuel consumption and production of heat-trapping gases by up to 23 percent. Gasoline-powered heavy-duty pickups and vans will have to cut consumption by 10 percent, or by 15 percent if the vehicles run on diesel fuel.

The standards also prescribe a 9 percent reduction in fuel consumption and greenhouse gas emissions for work trucks, which include everything from fire trucks and concrete mixers to garbage trucks and buses.

In a statement, Obama said the new standards had the support of companies that build, buy and drive medium and heavy-duty trucks.

The president had planned to unveil the standards at a trucking business in Virginia, a state crucial to his re-election hopes, but the White House canceled the trip Tuesday morning without explanation. Instead, the president he met privately at the White House with industry officials to discuss the initiative.

The White House projected savings of 530 million barrels of oil and $50 billion in fuel costs over the expected lives of the vehicles covered by the new standards, along with improved air quality and public health.

The administration released no miles-per-gallon equivalent for the new standards, saying that doing so would be confusing given the different categories of vehicles, the different types of vehicles in each category and the varying payloads that each one carries.

Officials did stress that the costs of making the trucks more fuel-efficient - ranging from hundreds to thousands of dollars per vehicle - will be recouped through reduced fuel costs over the lifetime of the vehicles.

It's the second round of fuel efficiency standards in the past month.

Last month, Obama announced a deal with automakers to double overall fuel economy to 54.5 mpg by 2025, starting in model year 2017. Cars and light trucks now on the road average 27 mpg.