NYC to Spend $127m on Minority Programs for Men 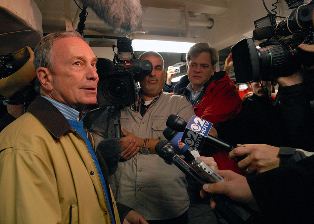 Billionaire Mayor Michael Bloomberg will kick in $30 million from his foundation and hedge fund manager George Soros will match that amount, according to the mayor's office. The remaining $67.5 million will be paid by the city.

The Young Men's Initiative was first reported by The New York Times on Wednesday. The mayor's office called it the nation's "boldest and most comprehensive effort to tackle the broad disparities slowing the advancement of black and Latino young men" in a statement.

It will include job placement, fatherhood classes and training for probation officers and school staff on how to help the young men get ahead. More than a dozen city agencies will be involved.

Bloomberg is set to announce the program at a community breakfast on Thursday.

One key component will be an overhaul of the Department of Probation, which supervises nearly 30,000 New Yorkers, most of whom are black and Latino males, according to the mayor's office. The department will open five satellite offices in neighborhoods with high populations of at-risk youth, with the aim of connecting men on probation to work and educational opportunities and reducing recidivism.

Of the funds, $18 million will go to "transformative mentoring and literacy services," according to a news release, while $24 million will go to a school program called the Expanded Success Initiative. The latter aims to close the so-called achievement gap between racial and ethnic groups in graduation rates. The city will also announce new measures to "hold schools accountable" for the performance of black and Latino boys.

Another $25 million will expand Jobs-Plus, which works with residents of public housing projects.

The mayor will issue an executive order barring city agencies from creating unnecessary barriers to city jobs for applicants from criminal convictions.

Earlier Wednesday, the mayor said he raised $1.5 million from anonymous private donors to resume statewide January Regents testing, exams that are critical to thousands of college-bound students. The tests were canceled after budget cuts and Bloomberg said 80 percent of the students hurt by the change were black or Latino. But critics said the lack of transparency raised questions about donors' motives.