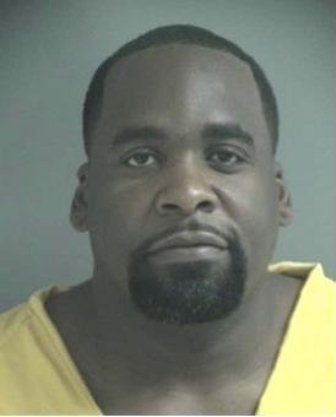 JACKSON, Mich. (AP) -- Former Detroit Mayor Kwame Kilpatrick walked out of prison early Tuesday offering big smiles and a bear hug for a relative there to greet him. He's free on parole but facing a federal corruption trial that could send him back behind bars.

Kilpatrick, 41, left the Southern Michigan Prison facility in Jackson after serving more than a year for violating probation in a 2008 criminal case.

He did not address reporters, who were kept back about 100 yards behind police tape, and drove off toward the Detroit area under police escort.

In a statement issued ahead of his release, Kilpatrick thanked all those who prayed for him and said he would speak openly about his time behind bars after he has reunited with his family. He planned to rejoin his wife and three sons near Dallas, where his parole will be overseen by Texas authorities.

"Detroit, I will return to speak frankly with you about this experience because it has affected all of us," he said in the statement.

"I am beginning anew. I am looking forward. I have new dreams and aspirations. I have a new hope. My greatest desire is that my testimony will give anyone who will listen permission to dream of greatness and to push toward it even in the midst of failure."

Kilpatrick heartily hugged his brother-in-law, Daniel Ferguson, who greeted him and carried his bag of personal items to a sport utility vehicle waiting outside the facility. An attorney accompanied the pair, and a videographer recorded the proceedings, Cordell said.

Cordell said Kilpatrick told them: "It's good to be out. I'm on my way."

Kilpatrick pleaded guilty to obstruction of justice and resigned from office as part of a plea deal in 2008. A judge found he had lied at a civil trial to cover up an extramarital affair with his chief of staff - in a lawsuit that cost Detroit $8.4 million.

The former mayor was imprisoned in May 2010 for failing to disclose assets and surrender sufficient funds that could have reduced his $1 million restitution to the city. Kilpatrick still owes Detroit more than $800,000 and a judge recently ordered that all profits from his upcoming book be placed in escrow to help pay off the debt.

His federal trial on fraud, tax crimes and a racketeering conspiracy is scheduled to start in September 2012. In an 89-page indictment filed in December, the government described a pay-to-play scheme in which Kilpatrick and his father, Bernard, took kickbacks and bribes to steer city business to certain contractors.

Both men have pleaded not guilty. Bernard Kilpatrick is not in custody.

People charged with felonies typically aren't granted parole but the U.S. attorney's office did not object to Kilpatrick's release.

The Democrat served in the Michigan House of Representatives from 1996 to 2001 and was minority floor leader from 1998 to 2000. He was elected mayor of his hometown in 2001 and served from 2002 through his September 2008 resignation.

Kilpatrick spent 99 days in the Wayne County Jail and in early 2009 joined his family in a Dallas suburb where he worked as a salesman for Covisint, a subsidiary of Detroit-based software company Compuware Corp.