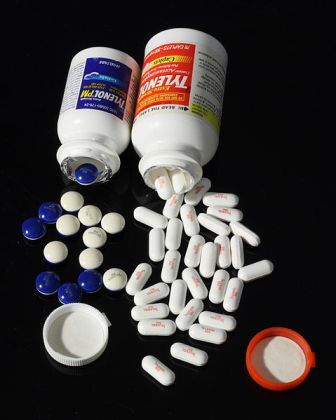 TRENTON, N.J. (AP) -- Johnson & Johnson said Thursday that it's reducing the maximum daily dose of its Extra Strength Tylenol pain reliever to lower risk of accidental overdose from acetaminophen, its active ingredient and the top cause of liver failure.

The company's McNeil Consumer Healthcare Division said the change affects Extra Strength Tylenol sold in the U.S. - one of many products in short supply in stores due to a string of recalls.

Starting sometime this fall, labels on Extra Strength Tylenol packages will now list the maximum daily dose as six pills, or a total of 3,000 milligrams, down from eight pills a day, or 4,000 milligrams. Beginning next year, McNeil will also reduce the maximum daily dose for its Regular Strength Tylenol and other adult pain relievers containing acetaminophen, the most widely used pain killer in the country.

Besides Tylenol, acetaminophen is the active ingredient in the prescription painkillers Percocet and Vicodin and in some nonprescription pain relievers, including NyQuil and some Sudafed products. It's found in thousands of medicines taken for headaches, fever, sore throats and chronic pain.

But people taking multiple medicines at once don't always realize how much acetaminophen they are ingesting, partly because prescription drug labels often list it under the abbreviation "APAP."

Two years ago, a panel of advisers to the Food and Drug Administration called for sweeping restrictions to prevent accidental fatal overdoses of acetaminophen.

Then in January, the FDA said it would cap the amount of acetaminophen in Vicodin, Percocet and other prescription pain killers at 325 milligrams per capsule - just under half the 700 milligram maximum of some products on the market then. The agency also said it was working with pharmacies and other medical groups to develop standard labeling for acetaminophen.

"Acetaminophen is safe when used as directed," Dr. Edwin Kuffner, McNeil's head of over-the-counter medical affairs, said in a statement. "McNeil is revising its labels for products containing acetaminophen in an attempt to decrease the likelihood of accidental overdosing."

Excessive use of acetaminophen can cause liver damage. In the U.S., it's blamed for about 200 fatal overdoses and sends 56,000 people to the emergency room each year.

McNeil spokeswoman Bonnie Jacobs said other makers of pain relievers are likely to make similar changes to their product labels.

Extra Strength Tylenol is manufactured at a J&J factory in Las Piedras, Puerto Rico, where production has been decreased for months because the FDA, concerned about manufacturing and quality problems, is requiring additional reviews and approvals before medicines can be shipped. J&J said shipments of Extra Strength Tylenol should ramp up in the latter part of this year and throughout next year.

Las Piedras is one of three factories implicated in most of the 25 Johnson & Johnson recalls since September 2009, involving tens of millions of bottles of Tylenol and other nonprescription drugs made by McNeil. Several prescription drugs, hip implants and contact lenses made by other J&J subsidiaries also have been recalled.

The recalls, for quality problems ranging from metal shavings and improper levels of active ingredients in some medicines to packaging with a nauseating odor, resulted in a consent decree between McNeil and the FDA this spring.

As a result, Las Piedras and a second factory, in Lancaster, Pa., are under additional scrutiny. The third factory, in Fort Washington, Pa., made children's medicines such as liquid Tylenol. It has been closed since April 2010 and is being gutted and completely rebuilt.

Jacobs said the label changes are not related to the recalls.