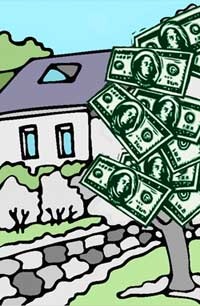 WASHINGTON (AP) -- The number of people seeking unemployment benefits dropped last week to the lowest level since early April, a sign the job market may be healing after a recent slump.

The Labor Department said Thursday that weekly applications fell 24,000 to a seasonally adjusted 398,000. That's the first time applications have fallen below 400,000 in 16 weeks.

The four-week average, a less volatile measure, dropped to 413,750, the lowest since the week of April 23.

Stocks rose after the report was released.

Economists cautioned that the lower level only reflects one week of data and that doesn't necessarily signal a trend.

The drop "is clearly good news," said Joshua Shapiro, an economist at MFR Inc. Still, "we would prefer to see further data before concluding that the earlier downtrend in claims is being re-established."

Separately, the National Association of Realtors said more people signed contracts to buy homes in June for the second straight month. But the increase was not enough to signal a rebound in the weak housing market.

The Realtors group said its index of sales agreements for previously occupied homes rose 2.4 percent in June to a reading of 90.9. The gain and an 8.2 percent increase in May did not make up for a huge drop-off in April when contract signings had fallen 11.3 percent.

A reading of 100 is considered healthy by economists. The last time the index reached that level was in April 2010, the final month when buyers could qualify for a federal tax credit.

The number of people seeking unemployment benefits remains higher than would be expected in a healthy economy. Consumers are holding back on spending because of stagnant wages, high unemployment, tighter credit, and depressed home prices. That's restraining economic growth.

Unemployment applications had fallen in February to 375,000, a level that signals healthy job growth. But they then surged to an eight-month high of 478,000 in April and have declined only slowly since then.

Some of the drop likely reflects seasonal volatility. Applications were elevated earlier this month partly because of temporary layoffs in the auto and other manufacturing industries, which are ending. Many auto companies close their factories in early July to prepare for new models.

Analysts forecast that the economy grew in the April-June quarter by an annual rate of only 1.7 percent, the second straight quarter of anemic expansion. The government reports on second-quarter growth Friday.

Hiring has slowed in recent months. The economy added only 18,000 net jobs in June. That's the fewest in nine months and below the average of 215,000 jobs per month that the economy added from February through April. The unemployment rate rose to 9.2 percent last month, the highest level of the year.

Manufacturing had been a bright spot in the economy since the recession ended two years ago. But it has stumbled in recent months. Orders for long-lasting manufactured goods fell 2.1 percent in June, the Commerce Department said Wednesday. It was the second drop in three months.

Economists had expected orders to increase, noting that temporary constraints have eased. In particular, gas prices have come down slightly since peaking in the spring. But manufacturing output has also been slowed by the Japan earthquake, which has disrupted global supply chains and created a parts shortage in the auto and electronics industries.

Federal Reserve Chairman Ben Bernanke and many private economists expect growth to pick up in the second half of this year, predicting those temporary factors will fade. Gas prices, for example, averaged $3.70 a gallon on Wednesday, down from their peak of nearly $4 in early May.

But some are growing more concerned that the economy's weakness will persist. The Fed said Wednesday that its survey of economic activity found growth slowed in eight of its 12 regions in June and early July. The report, known as the Beige Book, was the weakest this year.

Many economists are becoming more pessimistic about the second half of this year. Goldman Sachs recently cut its estimate for growth in the July-September period to 2.5 percent, down from 3.25 percent. JPMorgan, meanwhile, reduced its estimate to 2.5 percent from 3 percent.

Growth of about 2.5 percent is barely enough to reduce the unemployment rate. The economy would need to grow 5 percent for a whole year to bring down the rate by one percentage point.